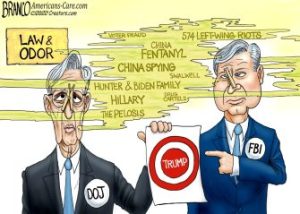 If you really want to understand the crazy and desperate actions of the Biden/Obama Administration, you have to know the real numbers.  Not the numbers of the latest poll that shows President Biden with a 40% approval rating.  The real numbers that the public never gets to see, because it’s secret behind the scenes research, is Bidens true approval rating.  Biden’s true approval numbers are somewhere between 11% and 12%, according to my confidential source and Martin Armstrong’s “Socrates” data mining computer.  If Biden’s real approval rating is not more than 12%, you can see why the Democrat party is panicked and in deep trouble.  They must do something to look stronger than they really are because they cannot even begin to cheat their way to victory in the midterms and beyond.  12% approval means most of the Democrats will not even vote for Biden or any other Democrats, and the economy is not going to give them or anyone else a reason to do so anytime soon.

The raid on the Florida home of President Donald Trump is backfiring bigtime on the Biden/Obama administration.  His poll numbers have shot up even higher, and he’s breaking records for campaign donations when he’s not even announced he’s running—yet.  This is just another fake made up case like the so-called “Russian Collusion” brought to you by fake FISA warrants, spying by the FBI and a fake dossier paid for by Hillary Clinton.  The public see’s this tor the political attack it is and not a legit law enforcement action by a corrupt Deep State that includes RINO Republicans and commie Democrats.

Inflation backed off a bit this month and went down to 8.5% year over year.  President Biden was so desperate for good economic news he spun this to mean 0% inflation month over month.  Of course, this is preposterous and not the way inflation is counted even with the gimmicks to make it look better than it is.  John Williams of Shadowstats.com says the real inflation as it was counted before all the gimmicks is around 17%.  Gasoline prices have come down a bit, but they are going back up as the supply of gasoline is down to lows not seen since the early 1990’s.  Enjoy the lower gas prices while they last.  So, inflation is down a bit for now, but not out.

There is much more in the 53-minute newscast.

Join Greg Hunter of USAWatchdog.com as he talks about these stories and more in the Weekly News Wrap-Up for 8.12.22.

Lt. Col. Theresa Long will be the guest for the Saturday Night Post.  Lt. Col. Long is a medical doctor who is blowing the whistle on the forced vaccines destroying the military readiness.  Dr. Long says all CV19 injections should have stopped long ago.  Is the U.S. military ready for a conflict with Russia and China?  Dr. Long will tell us.