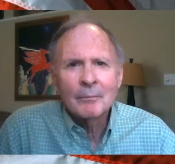 Bill Murphy, Chairman of the Gold Anti-Trust Action Committee (GATA), says don’t worry about the recent price drop forced on the markets by the gold cartel with naked short selling. It’s not going to keep prices down for long. Murphy contends, “We have been trying to expose what this gold cartel has been doing. The bullion banks, the Fed, the Treasury, the Bank for International Settlement (BIS) and what they have done is to suppress the price. What has happened after all these years is the gold cartels have run out of enough physical gold to do what they have done. They are lost. They have blown up really. They can act in the paper market, but since May, gold has made one new high after another. . . . They are panicking to get out, and to do that, they are panicking speculators to get out of the gold and silver markets and collapsing the prices.”

Murphy says physical gold and silver metal is being bought up at a fast pace with the artificially cheaper prices. Murphy says, “This is another example to how close we are getting to the gold market blowing up. I am talking about $100 per ounce up days will become common . . . because there won’t be any physical gold to meet the demand. It’s going to go bonkers all over the world. They can’t stop it. . . . All I can say right now is they (gold cartel) are panicking the paper speculators out of the gold and silver market so they can cover their massive short positions. It’s absolutely staggering what’s been going on in the past couple of days. They have created a panic in the paper market, but it’s not happening in the physical market. The U.S. Mint just stopped selling Silver Eagles because they ran out.”

Murphy contends, “Gold and silver prices right now are artificially low because of these (gold cartel) people. This is what’s going to cause the biggest move in history. It’s now coming down to the short strokes, and it’s been a long time coming. I can’t wait for it to happen. Then our (GATA) story will be told, but our story is not as important as getting the truth out to the people so they can take advantage of what’s going on.”

In closing, Murphy says, “The gold cartel has done this (price suppression) year after year after year, and now they have hit the wall. Some of us thought a ‘black swan’ would do this, and it has. It’s a horrible black swan. It’s a black plague, and it’s changing the American way of life for a long time to come.”

Join Greg Hunter of USAWatchdog.com as he goes One-on-One with Bill Murphy, Chairman of GATA.

GATA.org is a free website where you can get lots of information about what is going on in the precious metals world. Bill Murphy also has a website called LeMetropolCafe.com with some free information.  There is also a subscription service and the first two weeks are free.