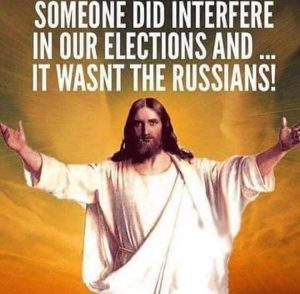 Bruce Ohr, the one time high ranking Department of Justice (DOJ) official, testified behind closed doors this week on Capitol Hill. In hours of sworn testimony Ohr, said that the Trump Dossier was basically a fraud that should not have been used in a court of law. That didn’t stop the FBI and DOJ from using it to fraudulently get warrants to spy on Trump and his campaign and his Administration. Bruce Ohr is naming names and says at least a half dozen top members of the FBI and DOJ knew the dossier was untrue and made up just to stop Trump from winning and later to try and use the false accusations in the dossier to remove him from office. This also means the Mueller investigation was conceived in fraud and is illegitimate. The indictments are coming, that is for sure.

Lots of trouble brewing in the Middle East. Russia is sending more than two dozen warships to the Eastern Mediterranean Sea because it says it fears another false flag gas attack in Syria. Meanwhile, Hezbollah is reportedly preparing for another war against Israel, while Iran continues to threaten closing down the Strait of Hormuz.

The so-called emerging market economies, such as Brazil, Argentina and Turkey, are just a few of the countries having big time trouble with their currencies losing value at an alarming rate. The Turkish lira has lost about half its value in one year. This means high inflation is ripping through these countries causing everything to skyrocket in price. Can this problem spread to the deeply indebted banks around the world causing another financial crisis? You bet it can.

(This report deals with the illegitimate Mueller investigation into Trump, new trouble brewing in the Middle East and an emerging market debt crisis.)

Macroeconomic analyst and global precious metals expert Rob Kirby will be the guest for the Early Sunday Release. How close are we to a gigantic debt reset? He will fill us in.