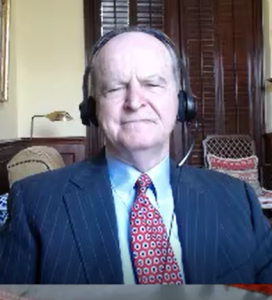 Legal and financial expert Wayne Jett says, “No one in history has ever stood up to the secret cabal running America the way President Trump has.” Signs abound in the mainstream media they are freaking out.   Jett says, “They are freaking out because the noose is slipping over the heads of some of them in terms of the prospects of their being tried for treason or for some other heinous crime. There are many of them. The network, I am sorry to say, goes far and deep throughout our society. . . . Many of them are doing all they can to make sure this comes to an end as soon as possible. We have a President who is actually a declared enemy of the forces that have put our Presidents in office or killed them generation after generation well back into the 19th century.”

Jett calls this a “fight to the death” between team Trump and the cabal. Jett says, “This is a death match no question about it, and I am encouraged. Compared to today and where we were in 2012 and 2016. . . . I had considerable confidence that President Trump was going to prevail. I didn’t care what the polls said. . . . There are too just too many indications that our press lies to us in whatever ways are necessary to support the ruling elite because they, in fact, are instruments of the ruling elite. . . . I can’t see how you could have a worse candidate than Hillary Clinton, but Joe Biden may be it. . . . I am optimistic.”

Jett is also an expert on the Federal Reserve. He wrote the popular book called “The Fruits of Graft,” about the Great Depression, that he says was engineered by the cabal on purpose. Jett says they will do it again because the Fed owes way more than it can ever repay. That means the dollar, at some point in the not-so-distant future, will be worthless. Jett explains, “It’s not even on the same meter. It (the Fed) is completely a sham operation, and just like every other fiat currency in history, the dollar as presently designed, is designed to fail. It’s designed to go to zero, and that’s what’s coming. What I think the President is doing is putting that off as much as he can, keeping the Fed from doing that and keeping it rolling until he can get this current account deficit down so we can come out with a gold backed currency. As soon as we get current account deficit more or less in balance, we can have a reset to a gold backed currency that is actually stable and actually designed to deliver value into the pockets of the people.”

So, how does the little guy play this? Jett says, “The key to your financial stability between this side of the chasm and the other side of the chasm is owning metals, owning gold and silver. These are most likely the types of things that will hold their real value. Therefore, on the other side of the chaos of this chasm, when you declare the present currency system has ended . . .I think the President is trying to make the period of uncertainty as short as possible between the time when the old currency dies and the new currency is in place.”

When is this going to happen? Is it before or after the 2020 Election? Jett predicts, “I think it is before the 2020 Election. I don’t think we can make it that long, especially with the global cabal trying to start a world war or trying to have a currency failure right now.”

Join Greg Hunter as he goes One-on-One with Wayne Jett.