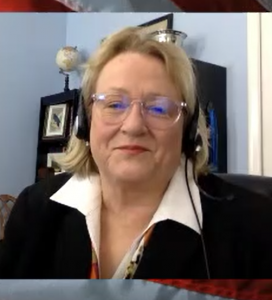 Investment advisor and former Assistant Secretary of Housing Catherine Austin Fitts says she is less worried about the coronavirus and more worried about what happens to China’s economy. Fitts explains, “Whatever is going on, it is going to slow down the Chinese economy. If China slows down a lot, it is going to put them in a dollar bear trap. The thing that kept the global economy going after the bailouts were the Chinese, and the Chinese did that by levering. A lot of that debt is dollar based. So, now if their income shrinks, especially after the trade war with the U.S. administration, they are going to be in a dollar trap. That means it’s (dollar) going to be stronger than if this would not have happened.”  In short, China will need dollars to pay debt, supporting the dollar.

Fitts goes on to say, “From everything I have heard so far . . . the virus is not my concern for the Western world. My concern is the vaccine. So, I am extremely concerned about Nano technology and vaccine injury. The process to push for vaccine mandates has been very extreme. . . . Why are we seeing such a heavy push for heavy schedules of vaccines and mandates for vaccines, which is in violation of the Nuremberg code and the U.S. Constitution?”

Fitts thinks that big tech and big government are seeking tighter and tighter control through technology and cloud computing. Fitts says, “You are going to have Microsoft, Amazon and the New York Fed banks operating and controlling a huge amount of data for the U.S. government. That means you can re-engineer the entire federal government at a very high speed. Imagine getting your Social Security check getting deposited into your Amazon account where you are restricted on what you can and cannot buy. . . . We are putting into place the technology where the control that can be done is beyond the imagination of most people.”

Fitts goes on to say, “In the meantime, there is no mention of the fact that they just took the United States government dark (because of accounting rule FASAB 56 recently instated that basically makes everything a national security secret in U.S. federal budgets) and it is a contradiction of every standard of responsible financial management we have ever known in the history of the entire Republic.”

Fitts thinks, “The Deep State is winning big time,” and the end goal is to “Take the land but you have to take the guns first.”

Fitts says things in the global economy are out of balance and progress is not happening. Fitts says, “The other way to get back into balance is with war. . . . We have had lots of covert wars going on, and my concern now is we are going to have more overt war.”

Fitts says people need to get ready for dramatic challenges coming, and she says the theme for common citizens is “to become less dependent and more resilient.”

Fitts also like gold as an investment because inflation is already here and is not going away anytime soon.

Join Greg Hunter as he goes One-on-One with Catherine Austin Fitts, publisher of “The Solari Report.”

There is free information on Solari.com. You can get way more cutting edge analysis from Catherine and “The Solari Report” by becoming a subscriber.