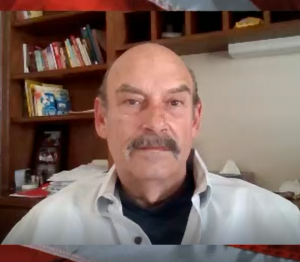 Financial writer and precious metals expert Bill Holter says forget about the relatively small sell-off in the gold and silver markets. The big worry shaking the markets is an enormous global credit problem. Holter explains, “Your protection about the credit market coming down is asset money, if you want to call it that. Gold and silver have no liability. They are not issued by a central bank, and there is no promise that has to be kept for it to perform. . . . Dollars, euros, bonds or what have you, those are all liabilities of a central bank or sovereign treasury. They all carry liability, and that’s what the problem is in today’s world. It’s a world completely awash in liability. . . . I think, ultimately, you are going to see a credit meltdown.”

Holter points out the U.S. government “Plunge Protection Team” is not only trying to prop up the stock market, but also is suppressing gold and silver prices. Holter says, “Friday’s hit in the gold market (down $60 per ounce) is obviously an ‘official’ movement because they don’t want people getting the idea that your safe haven is physical gold and silver. In other words, they tried to steer investment away from gold and silver by smashing it with paper contracts.”

Holter, who has two decades of brokerage and equity experience, also points out, “This coming week and the weeks going forward, I am sure there are all kinds of margin calls that will be forced selling. . . . So, this thing could become a self-perpetuating spiral (down).”

What about the Fed riding to the rescue again like in 2008-2009? Holter says, “Zero percent is very close to where we are right now. The Fed does not have the leeway they had back in 2008-2009. They were lucky then to get away with it. The markets are going to call their bluff. That’s pretty much what has happened already.”

Is there no bottom in the stock market here? Holter says, “Basically, that’s correct. . . . A cliff dive into a pool with two inches of water is a good analogy. . . . The global yield curve is fully inverted. . . . We have never had an inverted yield curve (short interest rates higher than long interest rates) that has not been followed by a recession. It’s going to be inflate or die. If they don’t inflate, the system will implode upon itself.”

Holter predicts, “I think in a short period of time you are going to see swings of $200 to $300 per ounce in gold and $5 to $10 per ounce swings in silver. From the standpoint of so much paper being sold compared to real physical metal, there is going to be a cash call. This will expose the fact that there are 300 or 400 paper ounces for every one real ounce that exists.”

On top of that, with China bailing out everything in China, it may have to back its currency to keep the yuan from hyper-inflating away. If that happens, Holter says, “Gold will have to be substantially higher to do that.”

In closing, Holter says, “Cash generation is slowing, and that is going to be a problem with servicing the existing debt. There is so much debt that it can’t be paid off. That is the problem. . . . I have said this many times, once the credit markets break, distribution will not happen and then it is credit game over.”