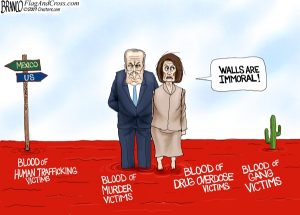 According to renowned gold investor Jim Sinclair, the global debt reset that has been long predicted has begun. Lots of debt that will never be repaid will be written down around the world. Sinclair says gold and silver will be the last men standing when the dust settles.

The BIS, World Bank and the IMF have all issued dire warnings in the past few weeks of financial “storm clouds.” In other words, the biggest bankers in the world are warning of another financial meltdown coming in the not-so-distant future.

Nance Pelosi and Chuck Schumer are being beaten up so badly over the government shutdown and security funding for a wall on the southern border that even singer Cher is telling the Speaker of the House and the minority leader in the Senate to “Be the Hero” and cave in and put 800,000 government workers back to work. The U.S. has a $4 trillion budget (that’s $4,000 billion) and Nancy and Chuck are holding up the government for little more than $5 billion in funding for security that includes a wall. Even Democrat James Carville is making fun of Chuck and Nancy’s response to Trump’s network appeal for a border wall and security on the southern border.

Catherine Austin Fitts founder of Solari.com will be the guest for the Early Sunday Release. She will give us an update on the serious matter of $21 trillion in “missing money” at DOD and HUD and why it will soon affect every American.