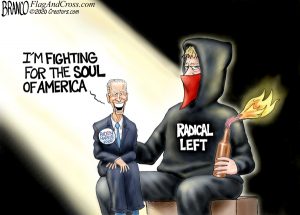 The Democrat convention to nominate Joe Biden for president was a disaster. Who are the Democrats kidding? They know full well that Joe Biden is not well mentally and is deficient. He thinks Arizona is a city, for goodness’ sake. It seems every time Joe is interviewed, it gets interrupted so his handlers can save his bacon from saying incoherent and stupid things. It now looks like Jill Biden is doing most of the public appearances. I’ll be shocked if Joe actually debates President Trump. Total disaster, and the Dems know it. This is why they want “cheat by mail.”

The president of Goodyear had to walk back the company’s support of Black Lives Matter and telling its workers NOT to wear MAGA hats in support of President Trump. Trump responded by tweeting out to his 85 million followers NOT to BUY Goodyear. The stock price was off 6% in a single day, and CEO Rich Kramer took it all back.

Catherine Austin Fitts, publisher of “The Solari Report,” is the guest for the Saturday Night Post. She will be talking about currencies and why you need gold and other tangible assets now.