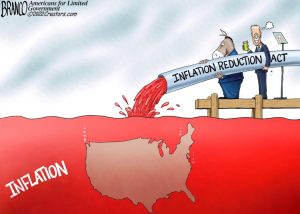 The Democrats in the White House look desperate with the actions they are taking because they do not make sense in a normal sane world.  The Biden/Obama Administration is declaring Monkeypox a huge heath problem when, in fact, it is only affecting a very small percent of the U.S. population.  It’s less than 7,000 people who are infected.  I guess the Biden Administration wants to release more funding for the next so-called pandemic, but the public is not buying it this time around.

The primaries have happened in many parts of the country, and we are still seeing voter fraud on a grand scale.  The Democrats have a terrible President with a terrible message and a sinking economy.  It all adds up to massive cheating because the Dems can’t find enough stupid people to vote for their own demise.  Without massive cheating, the Dems will be out of power come November.  Can they pull off the biggest cheat ever?  That is what it is going to take.

The Fed just raised interest rates another .75% and so did other countries such as the UK.  It raised interest rates and is projecting a severe recession.  It is also predicting 13% inflation by the end of this year.  The Fed is signaling it, too, will be raising rates more in the upcoming months to fight inflation even if it tanks the economy further.  The Dems already own the coming downturn, and many experts say this may turn into a Dem Depression.

There is much more news in the 37-minute presentation.

Join Greg Hunter of USAWatchdog.com as he talks about these stories and more in the Weekly News Wrap-Up for 8.5.22.

Biotech analyst Karen Kingston will be the guest for the Saturday Night Post.  Kingston says experimental vaccines are killing babies, and the mainstream media is covering it all up.   Kingston will give you the latest news on the bioweapon that are trying to pass off as a vaccine.