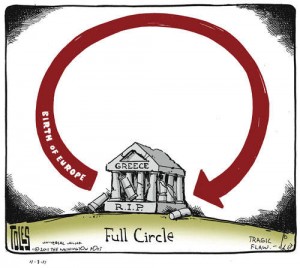 What is going on in the world today is both frightening and historic.  It is frightening because the amount of debt accumulated is orders of magnitude more than ever before.  It is historic because the way this finally shakes out will be considered a major turning point in modern history.  I see this, but most people in the world are either in denial, delusional or just a victim of disinformation by the mainstream media (MSM).  If you read this site often, you know I heavily source what I write about.   I do this because I want people to have solid information and analysis.  For example, just last week, a Morgan Stanley analyst named Joachim Fels sent a research note out to clients that talked about the EU sovereign debt crisis.  Here is part of what Mr. Fels said, “This past week, by raising the possibility that a country might (be forced to) leave the euro, core European governments may have set in motion a sequence of events which could potentially lead to runs on sovereigns and banks in peripheral countries that make everything we have seen so far in this crisis look benign.”  (Click here to read the entire story from Zerohedge.com.)

This Morgan Stanley analyst is taking about bank runs and is painting a calamitous picture of the EU sovereign debt problem.   I believe that most people haven’t a clue about what is going on and how their lives are going to change for the worse.  If they do, then they just refuse to believe that the government will let anything bad happen.  I got a comment from a reader by the name “In4mayshun” on a post I wrote last week titled “Two Financial Nukes Explode.”  It was about MF Global and Greece.  Both situations are far from over and sorted out.  The comment is below:

While I appreciate the time and research you put into the article, I feel it is a little over dramatic. At first you equate the bankruptcy of MF Global to a financial nuclear explosion, and then you reduce it to a canary in a coal mine. Well which one is it? I think this is why so many main stream individuals dismiss alternative media as dooms-dayers, always claiming the sky is falling. To a point this is accurate. Anyone with a brain can see that our financial system is slowly crumbling, but it could take 10-20 years for this thing to play out. Meanwhile, you have everyone with a blog forecasting the next financial apocalypse. Pretty soon, no one takes any forecast seriously.

I’m not trying to criticize, just saying…something to think about.”

I hate to say this, but it is clear to me the world is headed for another economic meltdown.  The power players know this and have made many startling and ominous comments, many of which have been quoted on USAWatchdog.com.  The only question left is when will the bottom fall out?  I do not know how long governments can put this off, but the facts and the numbers speak for themselves.  My answer is as follows:

I probably did not explain the math really well, but the bailout fund they have right now in Europe has about $350 billion in it.  The combined sour sovereign debt of Spain and Italy is $3.4 trillion.  My gut tells me you can multiply that $3.4 trillion with about 40 to 1 leverage.  That is a lot of trillions and both of these countries are going to follow Greece’s lead and default too.   It’s a better deal for them.  How will that affect the rest of the $600 trillion in derivatives the BIS says that’s out there?  Some say the true total is more than $1 quadrillion.  (FYI, over-the-counter-derivatives have no standards, no guarantees, no regulation and no price discovery mechanism.  There is no public market and zero transparency.  (Who’s got what and how much is this really worth?  I don’t know and neither does anyone else.) This is why they call this stuff “Dark Pools” and why Warren Buffett called OTC derivatives “weapons of mass destruction.” Mortgage-backed securities, credit default swaps, interest rate swaps are a few of the names. Insurance companies, banks, brokerages and retirement funds are a few of the places that are chocked full of this crap.  When this goes bust, lots of people are going to be poor just about overnight.  I am not being dramatic but warning about a real life changing event coming to the world.  I pray I am wrong.  Thanks for your email.  I am not trying to give you a hard time.  I am just giving you some background.”

People are in denial or delusional that everything is going to return to normal.  I blame this on the MSM and the lack of reporting and disinformation on how bad things really are in the global economy.  After one of my stories warning about the coming bad economy (circa early 2008), I was asked off-camera by one of the main CNN anchors if I was ever worried about “causing a panic.”  I don’t remember exactly what I said back to him, but it was something like “Telling the truth to the public is always appropriate.”  (If you want an example of what I was saying at CNN in March of 2008 before the meltdown, click here.)  After the last financial meltdown, people in the MSM sat around and said, “Nobody saw this coming.”  I wonder what their excuse will be the next time.