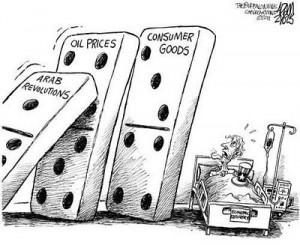 On Monday, I said at the end of my post, “I think someday we will “grow” our way out of the economic mess we are in but not before a very big fall.”  I didn’t think the fall would come the very next day–but it did.  Two monster nukes exploded on the financial landscape.  They are the surprise MF Global bankruptcy and the equally surprising Greek referendum on the second bailout package.  Kaboom and kaboom!!!  I see not one, but two giant mushroom clouds on the horizon, and destruction is headed our way.  Anyone underselling these two bombs is on some pretty heavy Prozac.  This is a turning point, and the turn is decidedly bad. It’s a global financial crash.

Two weeks ago, I wrote, “When European banks start failing, there is no way U.S. banks will be able to avoid being sucked into a vortex of default.   For anyone who thinks this crisis can be resolved with a pain free plan—forget it.  Welcome to the age of bank failures.”  (Click here for the complete post.)  I didn’t think MF Global, headquartered in New York City, would beat everyone to the punch.

MF Global is bankrupt for dealing in European sovereign debt.  CEO Jon Corzine was trying to make a quick buck with what are reported as “risky trades” and got a bankruptcy pie in the face.  There are allegations of missing money and possible criminal activity.  Considering this is coming from a former Primary Dealer in U.S. Treasuries, the Federal Reserve looks like it was asleep at the wheel of regulation once again.  Don’t forget the SEC and CFTC!  Where were the regulators?  There is no telling the amount of leverage and counterparty risk MF Global has, but we’ll be finding that out in the days and weeks to come.

And get this, for blowing up MF Global (a 200 year old company), Mr. Corzine might get a severance package of $12.1million!!  Let’s hope bankruptcy limits his pay to zero.  Heck, he should be paying money back to the company and its shareholders!   You wonder why the Occupy Wall Street people are protesting greed and corruption?  Even if MF Global does not turn into a Lehman Brothers event, it surely is one giant dead canary in the world’s financial coal mine. (Click here to read more on MF Global.)

The second big blowup happened yesterday when Greek Prime Minister George Papandreou called for a nationwide vote on the most recent sovereign debt bailout deal.  Everyone expects this to completely kill the deal because the Greeks have figured out they don’t want to be banker debt slaves for the next generation or two.  Who can blame them?  If little Greece can cause a worldwide crisis, what will happen when Spain and Italy ask for the same deal–a 50% cut in their combined $3.4 trillion in sour sovereign debt?  How much leverage and counterparty risk is there if they, too, decide to default and go back to their old currencies?  That has to be in the many trillions of dollars, and the EU bailout fund (European Financial Stability Facility or EFSF) has reportedly about $350 billion left in it.  The EU wants to raise the total to $1.4 trillion, but so far, the fund is falling short.  Even if it meets its goal, that’s not enough to stop the dominoes of failing debt on a global scale.

Carl Weinberg, chief economist at High Frequency Economics, explained the EFSF this way in a research note on Monday.  Weinberg said what the EU was proposing was a “crazy scheme” and explained his position by saying, “To listen to what they say, EU leaders – at an all-night summit last Wednesday ‘increased’ the size of their bailout fund to 1 trillion euros without putting a dime of real money on the table . . . . Now they (EU Leaders) are keen to tap into resources that are not their own to fund this crazy scheme of guarantees, leveraged off guarantees to sell bonds and bank shares that no one may want to buy, (in order) to restore value in the banking system destroyed by other bonds that no one wants to own right now. This is a construct of Madoffian proportions,” (Click here for more on this from CNBC.)

“Madoffian proportions” indeed, and we all know how that ended.  I can come to no other conclusion than we are headed for a global financial crash.  It is just a matter of when, and these two financial explosions have pushed the time table into fast forward.