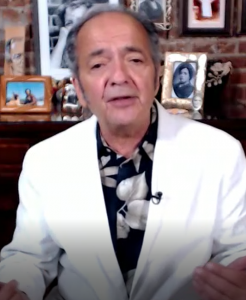 Renowned trends researcher Gerald Celente is making a big change to his 2018-2019 economic forecast. Celente says, “We believe we are setting up now for a market crash that will be the worst in modern American history. The fundamentals are . . . the loan bubble. There is $250 trillion worth of debt out there. Let’s put this together. What did the Federal Reserve do last week? They raised interest rates. Now, we are looking at the Fed Funds Rate back to 2008 levels. What’s going on in the emerging markets? As those interest rates go up in the states, you are seeing currencies crashing. They are hitting new lows in Argentina, Turkey and India. At the same time . . . oil is back up at 2014 levels. . . . Go back to the last five recessions. What were they preceded by? Higher oil prices. When the higher oil prices kick in, the recession kicks in, and the markets go down and gold prices go up. . . . We do not give financial advice, but gold right now, we believe, is at the bottom. You might get a price $30 per ounce lower, but the risk is very low . . . because $1,200 per ounce is around mining cost.”

So, what is the timeline for this coming market meltdown? Celente says, “The timeline is tough, but look . . . all you need is one major failure or one major hedge fund pulling out because that’s who is running the show. You look at the number of stocks that have declined . . . . Look at the big hedge funds and the private equity groups that are running this, and look at their debt level. It does not take a genius to figure this out. If you have $250 trillion worth of (global) debt and interest rates are going up, and it’s costing you more to borrow as you are making less, what is going to happen? It’s going to collapse. . . . You’ve got to pay more on your debt, and your debt is ballooning. Of course, it’s going to crash. It’s a Ponzi scheme. . . .It’s going to be worse than the Great Depression. When this thing crashes, it is gone.”

Celente says you should have is physical gold, but don’t wait too long to buy it. Celente says, “There is going to be a spike to the $2,000 per ounce mark when it gets past $1,450. It won’t be a gradual increase. It’s going to be the same thing that happened in the panic of 2008. It was going up slow and, all of a sudden, it escalated. That’s what we are going to see again. Anybody that has half a brain or is not a big sellout knows that this is a big Ponzi scheme. It was created by the federal banksters. It drove up equity markets, and it did not raise the standard of living of people around the world. This is why you see the populist movements popping up throughout Europe. There is going to be violence in the streets when the big crash happens because people are fed up with the establishment.”

Join Greg Hunter as he goes One-on-One with Gerald Celente, Publisher of The Trends Journal.

There is some free information on Gerald Celente’s website, TrendsResearch.com. You can also become a subscriber to The Trends Journal (now monthly) by clicking here.