Home
»
Political Analysis
»
Spinning the Economy to a Recovery 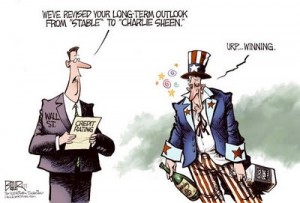 Remember back in early-2009, when the mainstream media (MSM) started with the ridiculous “green shoots” talking point?  Even though the data were dismal and there were no signs of the economy recovering, the “green shoots” term was used by just about everyone in the MSM.  I think not long after economist Nouriel Roubini said that the much talked about “green shoots” was really “yellow weeds,” the talking point changed to “recovery.” (Click here to read the complete “Yellow Weeds” article from professor Roubini.) Ever since, the MSM has described the so-called “economic recovery” in terms such as  “fragile,” “jobless” and “tenuous,” to name a few.   The data have repeatedly shown the “recovery” isn’t any of these terms because THERE IS NO RECOVERY.  Oh sure, the stock market has gone up, but so have the number of people on food stamps, which is at a new record of 44 million.  There is also no recovery for the 33 million people who are unemployed.  Forget the government B.S. of 9%, the true unemployment rate has been stuck north of 22% for months according to Shadowstats.com.

The latest numbers have shown there is bad news across the board for housing, autos, manufacturing, employment and consumer confidence.  Well, here we go again with the spin by the MSM.  Even though many are now admitting there is a double-dip in the economy, the talking points used to describe this new downturn are things like “temporary,” “transitory” and a good old fashion “soft patch.” Here’s how the Associated Press reported the story after a nearly 300 point drop in the Dow this week.  It said, “We’re definitely in a soft patch,” says Steve Blitz, senior economist for ITG Investment Research.  No one knows whether the slowdown is a temporary setback or the start of a prolonged period of anemic growth. Many analysts hold out hope that the economy will rebound in the second half of 2011.” (Click here for the complete AP story.) “Soft patch, temporary,” see what I mean?  Since when is holding out “hope” an investment strategy?  Me and the people I have been quoting on this site have been clearly telling readers there would be another plunge in the economy.  We were right and the MSM was wrong—again.

Money manager Hank Smith of Haverford Trust said yesterday on FOX Business, “It looks like we are having a soft patch for a quarter or two as we are in the expansion phase.” Mr. Smith blamed this “soft patch” on higher energy prices, the Japan earthquake and extreme weather.  Mr. Smith went on to say, “All these are transient or cyclical factors.  So while it is having an impact near term we do expect growth in the second half.”  “Transient, cyclical” all words that scream the message–don’t worry, it will be ok, just keep spending all your money!

The only way we see “growth in the second half” of the year is if the Fed starts printing gobs of money in what will be called QE3 (quantitative easing).  Mike Riddell, a fund manager at M&G Investments in London, was quoted on CNBC this week. The story said, “Pointing to the dramatic turnaround in the Citigroup “Economic Surprise Index” for the United States, Riddell said the tumble in a matter of months to negative from positive is almost as bad as the situation before the collapse of Lehman Brothers in 2008. . . . ‘You’ve also got to wonder at what point the markets for risky assets start noticing, too.  QE3 anybody?’ asks Riddell.” (Click here for the complete CNBC story.)

What you are seeing in the economy is not “soft patch, transient, temporary,” and it is veritable NOT a “recovery.” What we have now will one day be called the Greatest Depression in history!  Things will forever be changed in America, and it will take a generation to dig out from under the avalanche of debt bankers created.  That is the cold hard truth the MSM will never tell you.