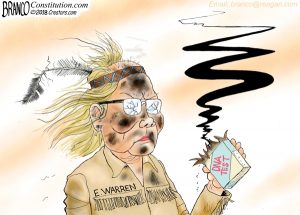 The stock and bond markets look like they are wobbling and signaling a warning. One day the stock market is up 500 points, and the next it’s down 800 points. Gregory Mannarino of TradersChoice.net says, “Nothing is real and everything is fake.” The bond market is also gyrating up and down along with interest rates. With global debt at all-time record highs, even a small spike in interest rates could cause the whole financial system to come tumbling down without notice. The financial asset bubble blown to reflate the losses of 2008 could, once again, correct to fair value from a much higher high. Mannarino has long said everything will eventually correct to fair value, and that will look like a bigger disaster than the 2008 meltdown.

The caravan of an estimated 4,000 illegal aliens from Central America is trying to make the long trip from southern Mexico to the southern border of the U.S. President Trump says it is yet another desperate stunt implemented by Democrats and the global elite.   Trump has threatened the Central American nations these folks are coming from with a cut off of U.S. foreign aid. This seems to be working to stop the caravan. Trump has also said if Mexico does not stop the caravan, then he will deploy the military and stop them from coming into America.

Democrats think they are going to retake the House of Representatives in November. If they win, the Speaker of the House will, once again, be Nancy Pelosi. Pelosi has promised massive gun control and open borders. The Dems cannot win with this message. So, they will have to cheat, and Trump and the Republicans will try to stop the voter and election fraud that the mainstream media is reporting as GOP voter suppression.

The guest for the Early Sunday Release is Dr. Dave Janda of the popular radio show “Operation Freedom.”  He will give insight and analysis on what is going from the economy to upcoming military tribunals.