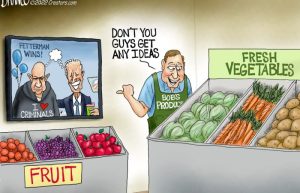 If you listen only to the lying legacy media (LLM) you would think the 2022 Midterm Election was a huge loss for President Donald Trump.  Trump won big despite the cheating, glitches ballot drops (for losing Dems) and the huge psyop that carried on after election day.  If you question the cheating, which few do on the LLM, you are an “election denier.”  How dare anyone question or object to the massive cheating that has been taken to a well-oiled art form.  The “Swamp” or “Uni-party” consisting of Communist Democrats and RINO Republicans work together for a common goal.  The two parties just take turns ripping us off.

Trump won because he crisscrossed the country on his own dime backing candidates in the House and the Senate that would try to “Make America Great Again.”   Yes, MAGA!  To the elite like Schumer, McConnell, Pelosi and the rest of the treasonous political weasels that attack “We the People,” that is crazy talk.  Trump’s election record of backing candidates in the 2022 election is a lopsided 219 Wins to only 16 Losses, and it’s hard to tell if the losses were only because of the massive cheating campaign that even LLM dog FOX News will not mention.  The Republicans owe Donald Trump a huge thank you for winning back the House and the Senate!!!  Let’s hope the Uni-party doesn’t pull another mysterious ballot dump and “win” by cheating again.

Inflation cooled, according to the latest government numbers, to 7.7%.  The markets rocked higher, and everyone is once again talking about a Fed pivot to stop the rate hikes and continue the easy money for a few more years.  Don’t count on the party to last this time.  Layoffs are rocking the country, and mortgage applications just hit an all-time low.  The real economy is still sinking, and the numbers don’t lie.

There is much more in the 55-minute news cast.

Join Greg Hunter of USAWatchdog.com as he talks about these stories and more in the Weekly News Wrap-Up for 11.11.22.

(Tech Note: If you do not see the video, know it is there.  Unplug your modem and plug it back in after 30 secs.  This will clear codes that may be blocking you from seeing it.  Also try different browsers.  All this is a way to censor people like USAWatchdog.com.)

After the Interview:
Top selling book author and founder of TheEconomicCollapseBlog.com, Michael Snyder, will be the guest for the Saturday Night Post.  Snyder will talk about the huge problems in the economy and his new book called “End Times.”