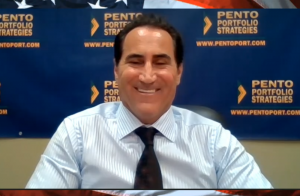 Money manager and economist Michael Pento warns to keep your eyes on the Fed.  It will be responsible for the next market crash coming this year or next.  Just look what happened after the most recent Fed meeting last week.  Pento says, “After the June FOMC meeting, the Fed talking about tapering sent stock prices skidding. . . . When they actually announce they are tapering, and when they actually announce a date for tapering that, I believe, will be in August at Jackson Hole, the market will sell off absolutely.”

The Fed has been propping up the markets with massive amounts of printed money since the financial meltdown of 2008.  Something has changed, and Pento points out, “Now, the inflation has become such a problem that even the Fed can no longer ignore it.  Now, the calculation goes like this:  Either the economy will slow significantly on its own to slow the rate of inflation, which will cause the earnings per share to collapse and the stock market will collapse, or the Fed is going to kill it for you. . . . There has been an epiphany, a watershed moment at the Fed . . .  they are all starting to notice the inflation.  Even the core rate of inflation has gotten out of hand, and they have to address it.  They can’t ignore it, and this is the big watershed change.  I cannot stress this enough.  The big change is the success of creating 2% inflation, which is now well over double what the Fed wants it to be.”  They wanted 2%, and it’s now over 5%.  The Fed is going to kill the economy or the economy is going to roll over on its own.  I think it’s going to be both.”

In closing, Pento says, “We are going to go through iterations of inflation and then rapid and devastating deflation. . . . And with each iteration, the bubble gets bigger and the amount of debt grows exponentially.  Do we have one more left or two more left?  I don’t know, but I am calling for a rapid and violent deflationary bust of asset prices probably early in 2022. . . . At some point, bond market yields spike out of control.  That is not happening yet. . . . After that, you are going to see a problem with helicopter money like we have never seen before and inflation like we have never seen before.”