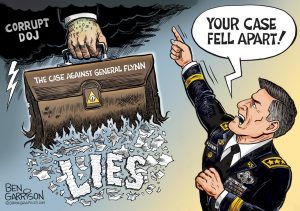 Newly released documents show the FBI framed General Michael Flynn in the first interview at the White House early on in the Trump Administration. Flynn did nothing wrong but was coerced to plead guilty to a crime he did not commit. Now, the tables are turned. Will jail time be given to the perpetrators of this crime?

President Trump blamed China for the Virus debacle that killed “hundreds of thousands around the world.” The President ripped the World Health Organization (WHO) for acting like a “PR agency for China.” President Trump is considering ways to punish China and make them pay for the damage.

Just because the stock market is vaulting higher does not mean the economy is good. It’s not good, and it could be maimed for a very long time. Everybody is excited with the prospect of reopening the economy, but big time damage has been done and will be with us for years to come.

Radio legend and filmmaker Steve Quayle will be the guest for the Early Sunday Release. He talks about everything from active volcanos sprouting up all over the world to China and its drive to take over America.