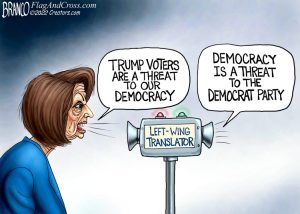 The Deep State Democrats are afraid Trump will help win the House and Senate in 2022 and be back in the White House in 2024.  It’s so bad that the White House, DOJ and FBI are trying to come up with a new crime to frame Trump.  The last frame job by the FBI was a spectacular failure as it was revealed the so-called “Russian Collusion” was ALL made up right down to the totally phony incriminating dossier paid for by Hillary Clinton.  This time, the frame job appears to be more out in the open as the judge, who signed the affidavit to raid Trump’s personal Florida residence, has ordered the affidavit to be unsealed.  It will also be redacted.  So, expect to see a lot of black ink.

That is not the only problem coming for Donald Trump.  I have been telling you for months about how bad the CV19 bioweapon/vax is and why Trump has to call a halt to the vax in the light of spiking deaths and injuries.  No doubt, Trump faced a tsunami of lies and liars about the vax.  Dr. Deborah Birx recently came out and admitted that she always knew the mRNA vaccine would “not protect against infection” of the CV19 virus.  This, after 600 million doses of swill they tried to pass off as a vaccine was injected into a gullible public.  Now, a House Select Committee says Trump authorized “unproven treatments” as the death and injury count from the vax is on its way to the moon.  President Trump was lied to by everyone about the CV19 vax.  It is not safe and not effective, but rather deadly and debilitating.  The death and injury numbers will be in the 10’s of millions for America alone before it’s all over.  Donald Trump will have to say it was all a mistake and he thought he was the “Father of the vaccine,” not a bioweapon that is killing in mass.  The sooner Trump sucks it up and says the CV19 vax was a huge lie and monstrous fraud, the better.  “Stop the Shots” should be Trump’s new battle cry.

If you think the economy is getting better, you are living in a protected fantasyland.  The government might shut down this Fall.  40% of small businesses cannot afford their rent.  20 million Americans are behind on their power bills, and their electric may be shut off by Fall.  The Fed looks like it’s going to continue to raise rates to fight inflation, but it will kill what’s left of the economy.  Oh, gas has gone down a bit, but it looks like it will be heading back up soon to record highs because of instability in Ukraine, China and the Middle East.

Join Greg Hunter of USAWatchdog.com as he talks about these stories and more in the Weekly News Wrap-Up for 8.26.22.

Six-time best-selling author Jonathan Cahn will be the guest for the Saturday Night Post.  He’s coming to talk about his upcoming book “Return of the Gods” and reveal it’s really a return of demons and evil that is plaguing the world today.  He’ll tell you how to deal with the evil chaos that is happening all around.  You will not want to miss this.