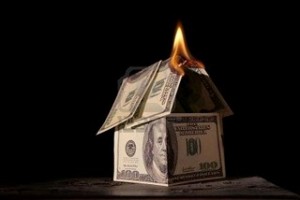 You have to respect the power of the Federal Reserve when just a statement can turn the entire stock market around in a day.  Yesterday, the Fed admitted the economy was not good and in a statement said, “. . .downside risks to the economic outlook have increased.”  Because the economy is tanking, the Fed promised to keep a key interest rate at near 0% for “. . . at least through mid-2013.”  The Fed is essentially handing out free money at negative interest rates for 2 years.  The Fed also seemed to signal that a third round of quantitative easing (QE3 or money printing) was being considered.  The Fed statement went on to say, “The Committee discussed the range of policy tools available to promote a stronger economic recovery in a context of price stability.  It will continue to assess the economic outlook in light of incoming information and is prepared to employ these tools as appropriate.”  (Click here to read the complete Fed statement, released 8/9/11.)   With interest rates near 0%, the only “tool” left with any torquing power for the economy is money printing.  The buck will be burned.

The stock market loved the announcement, but anyone holding dollars was left with a sinking feeling.  Bloomberg reported yesterday, “The dollar tumbled the most in at least 40 years against the Swiss franc after the Federal Reserve pledged to keep its key interest rate at a record low . . . The greenback declined versus the majority of its most- traded peers as the Fed said growth was “considerably slower” than it expected and it’s prepared to use a range of policy tools to boost the economy.”  (Click here for the complete Bloomberg story.)

The gold market has been hitting one new all-time high after another because of past, present and future money printing.  I think big money is panicking into the gold market for safety.  Sure, the Treasury market is the biggest and most liquid on earth, but how safe is it when the U.S can print trillions of dollars at will to pay its bills?

It is not the small investor that’s causing $50 a day spikes in the gold price.  Hedge funds, sovereign wealth funds and central banks are the ones doing the buying and shooting the gold market higher.  Recently, South Korea bought 35 tons of gold, and Mexico bought 93 tons of the yellow metal.  Why don’t these countries just hold Treasuries in reserve?  In the past few years, India, China and Russia have all been adding to their gold reserves.   EU nations have stopped selling their gold, and with the sovereign debt crisis in Euroland, who could blame them.  Italy and Spain are teetering on collapse.  Don’t be surprised if the European Central Bank prints money and bails them out too.

On this side of the pond, America just got hit with its first downgrade in history because of record debt and zero political will to solve the problem.  It is really a downgrade of the dollar.  The mountain of debt and insolvency Europe and the U.S. face is monumental and historic.  Is there any wonder why gold is rising in all fiat currencies?  It is hard to imagine how anyone could think gold (and silver for that matter) is in a bubble.  Yet, I received this comment on the USAWatchdog.com site yesterday from a reader named Morris who told me, “You have normalcy bias towards the PM markets. You weirdly believe what others are preaching just because they say so??? That is hogwash. As you have said, we are in unprecedented times and previous correct predictions by all of your so-called experts –  – including past history of PM’s performance is 100% meaningless…do you not get this Mr. Hunter????? Do you not understand that all history to date is BS as what is happening now will re-write all of history!! What do I mean? Gold/Silver will be controlled and manipulated to no end and your sources have no clue on what/where they will go. THEY WILL NOT go to the numbers you or your experts predict. . .”  Sure the gold and silver markets are manipulated, and so is the stock market.  It has been propped up by the Fed with QE2 and, soon, QE3.

I answered Morris by saying, “You say I have flawed analysis but offer no real analysis of your own. I quote the people who put their capital at risk and have a track record of being correct.”  (Click here and scroll to the bottom of “Brace for Impact” for the complete comment and answer.)

One of the people I have quoted is Jim Sinclair (JSMineset.com).  He is one of the world’s very best experts in all things gold.  He has a track record of correct calls going back to the 1970’s.  (I noted his monster calls in a post titled “Print More Money.” Scroll to the end of the post.)  Sinclair has been bullish on gold since the current bull market started in 2001.  He says, “The ultimate protection for yourself is to own gold and be your own central bank.”   I find that logic hard to dismiss with a systemic solvency crisis facing the world today.  (Click here for more from Sinclair.)

Another trusted expert is fund manager Eric Sprott of Sprott Asset Management.  Sprott has one of the top performing funds during the last 10 years.  He, too, has been riding the current gold and silver bull market since the beginning.  He says both metals will go way up in price in the future.  Sprott says, “Gold was the investment of the last decade and silver is going to be the investment of this decade.”  Sprott has invested hundreds of millions of dollars into physical silver.  He contends supply demand fundamentals are very favorable, and silver is still relatively cheap.  Sprott isn’t worried about silver lagging the soaring gold price. In a recent interview with GoldMoney.com, Sprott said, “You just see things developing in the market that could make it (silver) explode at any time.”  Sprott does not give an exact time frame but says, “All I know is you can safely own it.  Go to sleep at night . . . and you’ll be a big winner. . .”  Sprott interview on GoldMoney.com is below:

I wouldn’t bet against Sinclair and Sprott, or gold and silver in 2011 and beyond!