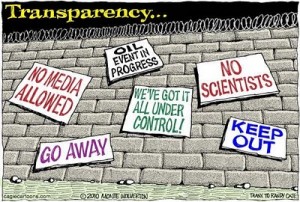 Last week, guest writer James Howard Kunstler wrote a compelling and controversial article on this site called, “What If He’s Right.”  It was about shocking comments made by veteran oil analyst Matthew Simmons in an interview about some extreme dangers BP’s Gulf gusher pose.  Kunstler did a great job with the article, but the comments were so alarming I felt further work was needed to verify Simmons’ claims. (Click here to go to the original article with links to Simmons’ interview.)  So, I called the National Oceanic and Atmospheric Administration, or NOAA.  The press office bumped me upstairs to the U.S. Department of Commerce.  That is the federal agency which oversees NOAA.  The Deputy Director of Public Affairs, Shannon Gilson, called to answer my many questions.

I told Gilson some of Simmons’ claims.  One big claim I told her about was the assertion by the veteran petroleum analyst that there was a “giant lake of toxic oil under the Gulf.”  She told me right then and there, “The data hasn’t born that out.”  Gilson did confirm the finding of undersea oil that was “dispersed,” but no lake.

Another big claim Simmons makes is there could be some significant loss of human life if this pool of toxic oil was blown ashore during a hurricane.  There are many other formidable claims in the Simmons’ interview, and he inferred he got his information from sources aboard the NOAA ship, Thomas Jefferson.  Gilson told me she had not heard this particular interview and said, “Let me take a listen.  Let me get back with you.”  I thought that was the proper thing to do given the claims by Simmons were so frightful and horrible.  We agreed to talk again at 2:00P the next day.   A little after 2:00P the following day, I called and got voice mail.  I called again a couple of more times before the end of the day and, still, got Gilson’s voice mail.  At 5:30P, I received an email from Gilson that said in the subject line, “Sorry I missed your call.”  The email was one single line that said, “The research team aboard the Thomas Jefferson has captured samples of subsurface oil, but has not found any scientific evidence of a “lake of oil.”

I sent Gilson a reply that said:

Matt Simmons makes many claims in the interview we talked about in detail.  Is this all what NOAA and the Commerce Department is willing to say on record?  What about the high amounts of what he calls “wet methane” under the water?  Simmons says, If a hurricane comes, the coast should be “evacuated” for miles because of the toxic chemicals that will be blown inland.  Simmons also says, the toxic oil and methane that could be pushed on shore could “be one of the greatest losses of life ever from a natural non war event.”  John Kessler from Texas A&M  says what’s coming out of the well is “40% methane”  as opposed to the normal 5% commonly found in oil.  I have many other questions about this interview with one of the top oil consultants in the world.   May we talk?

After this email, I sent another request for an interview with Ms. Gilson to debunk Simmons.  I had many other questions about other controversial quotes from Simmons, but was not given the opportunity to ask.  One of the more extreme was his suggestion for closing the runaway gusher with a “small” nuke deep under the ocean floor to melt the rock to shut off the flow of oil.  If all of this is untrue or crazy, then why wouldn’t the government simply say so?  Could every single thing Simmons said be wrong, or said for some hidden motivation?  I don’t know, but government silence is not helpful, and it fosters a conspiracy sort of atmosphere.  I do know one thing–silence on dire warnings from one of the most well known oil men in the world is just as discomforting.