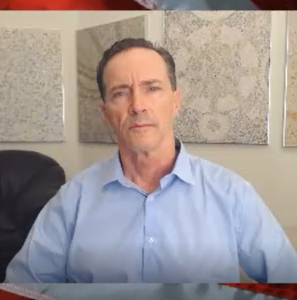 Climate engineering researcher Dane Wigington says Hurricane Dorian is the latest storm to be steered by the U.S. military. Wigington contends, “It’s an historical, verifiable fact and verifiable in the immediate term as well as we have animations of radio frequency microwave transmissions directly interacting with, interfering with and steering that storm (Dorian) as well as other storms such as Hurricane Harvey and Hurricane Maria. That data can be found on GeoEngineeringWatch.org. . . . You can see real time, conclusive evidence that these storms are being manipulated. . . . We can speculate on the agenda, but the fact that that storm is being manipulated and stalled is absolute indisputable fact. The U.S. military started their hurricane manipulation operations 72 years ago in 1947. We have 7 decades of this going on. . . . President Johnston stated on the record that the military had the power to control the world’s cloud cover even then. The notion that this is not going on right now is simply a deception.”

Wigington also points out, “We have seen in the last 5 years in the Eastern U.S., the lower 48, the most anomalously, less warm region in the entire world. That’s not nature. That’s not coincidence. It’s geoengineering. What does that do? It confuses and divides the population in those zones in the U.S. as to the true state of the climate.”

The wildfires around the world are also being leveraged by climate engineers. Wigington explains, “We have many, many sources for the ignition of those wildfires. We are not claiming to come to any conclusions on the sources of the ignition for the fires. What we are saying is the conditions are being orchestrated to make it conducive to make these burns. The template is being set by climate engineering. There is absolutely no question about that. . . . These wildfires are being used as a last ditch, desperate effort by the climate engineers to put enough sun blocking particles into the atmosphere to temporarily mask the Polar Regions on which life depends. The total loss of summer sea ice in the Artic is immense because then the heating goes exponential. Methane released from the sea floor goes exponential. That methane fills the atmosphere and covers the planet like a layer of glass, and then we are on track for what is known as ‘Venus Syndrome.’”

Wigington also says the geoengineering spraying program commonly referred to as “chemtrails” has not been stopped as many in the alt-media are saying. Wigington contends, “There is not a shred of evidence to support that. Although some people in some regions are seeing less visible geoengineering spraying and dispersion operation in some regions, they are in the Polar Regions. . . . The Polar Regions are the focus of the climate engineers. So, those assets have moved up to the Polar Regions. We have current grid pattern spraying from all over the globe. . . . We see massive spraying operations over the oceans, for example.”

Join Greg Hunter as he goes One-on-One with Dane Wigington, founder of the biggest climate engineering website on the planet, GeoEngineeringWatch.org.

GeoEngineeringWatch.org has just posted animation showing how Hurricane Dorian is being repelled with microwave technology that is on the Eastern Florida coast. Click here for a brand new video from Dane Wigington of Geoengineering Watch.org showing Dorian and the manipulation of the storm over the Bahamas.

There is lots of totally free information on GeoEngineeringWatch.org. Wigington recommends watching “Hacking the Planet: The Climate Engineering Reality” to get a good grasp of what is going on with climate engineering on the planet. He also recommends “Wildfires Serve Geoengineering Agenda” to better understand all the global wildfires going on now.

If you want to support GeoEngineeringWatch.org there is a donation section on the upper right hand side of the home page that includes a snail mail address and a PayPal button.