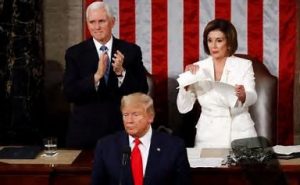 It’s hard to imagine what a worse week for Democrats would look like after this past week. The impeachment came to an abrupt halt with a thud. President Trump was not only not removed from office, but he was acquitted on both constitutionally fraudulent impeachment counts. The House ran a totally unfair impeachment hoax that was brought by a CIA officer and concocted with the help of Democrat Congressman Adam Schiff’s office.

The annual State of the Union (SOTU) address by President Trump was a slam dunk on the Democrats. More than 75% of people who watched the SOTU speech said they enjoyed and agreed with it. I called it a dunk-fest, and Speaker Pelosi did not enjoy it in the least. That’s why she publicly tore it up after the SOTU speech on camera for all the world to see. Pelosi may have just as well ripped the Democrat party in half in a very childish and dumb move.

Democrats should have thanked their lucky stars that so much was going on in Washington D.C. because what went on in the Iowa Democrat primary was an unmitigated disaster. There was chaos, confusion and charges of rigging the caucus votes to take away a victory from Bernie Sanders—again. Now, DNC Chairman Tom Perez is telling Democrats to recanvas the entire state of Iowa to make sure the vote is correct. How do you spell disaster? D E M O C R A T !

Financial analyst Bo Polny will be the guest for the Early Sunday Release. The markets have not taken a plunge because of massive money printing. Polny says don’t expect that to keep working for long.