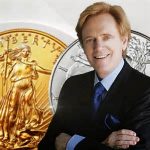 Financial expert Mike Maloney says what is going on in the economy is like a mass mental illness, especially when you consider the geopolitical risks and extreme valuations across the board. Maloney explains, “We have a stock market and real estate market and a bond market that are all insane.  We’ve got this crazy world where everything is at these valuations that are just impossible things.  That will cause a peak, and we are at a point where we are way overdue for a recession.  Recessions occur every four and a half years on average.  Just two months ago, this became the third longest expansion in U.S. history. . . . In 11 months, it becomes the second longest in history.  So, the chances of going into another recession sometime soon are very, very high.  The chances are on the order of 90% or higher right now for another recession.  When you couple this insane overvaluation of the stock markets, real estate is back in bubbles in most major cities . . . and this has been the perfect bull market for bonds, and at some time interest rates have to rise. . . . We are at the point now where we are going to hit big ruts and bumps in the economy, and the Fed has just taken the training wheels off of the bicycle. . . .This is the worst recovery in history.”

Maloney, who is an expert on gold and silver investing, says, “With all this geopolitical risk from North Korea, and we just dropped the ‘Mother of All Bombs’ (MOAB) in Afghanistan, which was most likely a threat to North Korea, we are at a very dangerous point in our history. . . . Since Kennedy . . . I can’t remember a time that was this dangerous.”

On gold, Maloney points at what large foreign countries are buying and says, “Between Russia, China and India, their purchases meet or exceed all worldwide production of gold. Whenever they exceed mining supply, the supply has to come from somewhere, and it’s coming from the West.  When the dust settles, the East is going to be very wealthy, and the West is going to be poor.”

In closing, Maloney says that all the money printing and manipulation only pushed off the real crash into the future. Maloney explains, “These things bought us some time, but they made the eventual crash much, much worse.  What we are going to see is that 2008 is going to be a speed bump on the way to the main event.  2000 was a stock market crash.  2007 was a real estate and stock market crash.  This crash is going to be stocks, real estate and bonds.  Bonds have been in a 32 year bull market, and no bull market goes forever.  It’s just impossible.”

Join Greg Hunter as he goes One-on-One with best-selling author Mike Maloney of “Guide to Investing in Gold & Silver” and the founder of GoldSilver.com.

There are free articles, videos and analysis on GoldSilver.com. To look at the free ongoing series “The Hidden Secrets of Money,” click here.  Maloney also sells a variety of products including gold and silver bullion coins.  If you are in the market to buy, USAWatchdog.com viewers can get a special discount by using the promo code GREGHUNTER.   (USAWatchdog.com and Greg Hunter get zero compensation from this deal.)