Home
»
Political Analysis
»
Is The American Empire Being Looted? 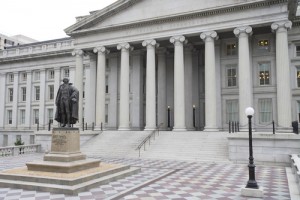 It is said at the end of an empire, the Treasury is always looted.  In the case of America, it is the value of the dollar and the credit rating of the United States that is being robbed from the American people.

NYU Professor of Economics, Nouriel Roubini, said in August of last year, “Recent economic, financial and geopolitical events suggest that the decline of the American Empire has started. After the collapse of the Soviet Union there was a brief period where the world switched from a bipolar balance of two superpowers to a unipolar world with one economic, financial, geostrategic superpower, or better, hyper power, i.e the United States. But by now three factors suggest that the US has squandered its unipolar moment and that the decline of the American Empire – as the US was in effect a global empire – has started.”

No one is backing a truck up to Fort Knox to pilfer America’s gold.  Nor is anyone swiping pallets of hundred dollar bills from the Bureau of Engraving and Printing, at least not yet.  So how is America being looted?

Let’s start with the 787 billion dollar stimulus program that was passed by Congress early this year.  The Bill was supposed to create lots of jobs.  According to President Obama’s Council of Economic Advisors, 600 thousand to 1.1 million jobs are estimated to have been “saved or created.”  When I read that in the paper, I thought “wow that’s all the jobs we got out of all that money?”

So, I called my tax man Steve to crunch some numbers for me.  Steve is a Certified Public Accountant.  I told Steve, “Let’s give the President’s Advisors the benefit of the doubt and say 1.1 million jobs were “saved or created.”  Divide 787 billion dollars by the 1.1 million so-called jobs and, according to Steve the CPA, it comes out to $715,000 per job “saved or created.”  This is not a mistake.  Steve checked the math.  It came out to 715 thousand dollars per job!

There is no way on God’s green earth that you can spend that kind of money and get that few jobs without massive fraud, waste and abuse!

Then a day later we find out, according to the Associated Press, that the “stimulus jobs were overstated by thousands.”  The AP report said, “…some jobs credited to the stimulus program were counted two, three, four or even more times.” …  “A child care center in Florida said it saved 129 jobs with the help of the stimulus money.  Instead, it gave pay raises to its existing employees.”   What a boondoggle!

The same is true for the Troubled Asset Relief Program or TARP.  700 billion dollars was appropriated so the banks could buy toxic assets to “free up” lending.  No toxic assets were bought!  What a taxpayer rip-off.  The Treasury handed out the cash to financial institutions and let the bankers spend the money on whatever they wanted.  Surprise, the bankers did spend some of the money on billions in bonuses to reward the very people who caused the economic meltdown in the first place.  No bankers were fired.  They just got big bonuses!  Yes, some banks such as Goldman Sachs and JP Morgan Chase did pay back the TARP money, but so what!  Those banks got huge financial help in other ways.  Check out my post called “The Untouchables: Goldman and Chase” for more on those taxpayer rip-offs.

I don’t know if all the trillions created and spent is just waste, incompetence or downright fraud.  It is probably all of the above.  It really does not matter because, in the end, the outcome will be the same.  The dollar will be diminished and the credit rating of the U.S. will be destroyed.  In the Great Depression, the value of the dollar and the “Full Faith and Credit” of the country were never in question.  I predict, before this financial crisis is over, both will be looted from the American Empire.