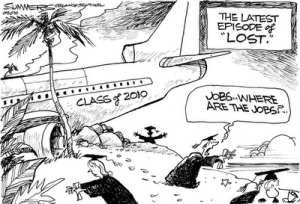 There was a lot of talk this week about an improving job market.  It seems everybody is talking up a turnaround in the labor market.  Some CNBC anchors, yesterday, put their usual optimistic spin on the topic of May payroll and unemployment numbers due out today.  Guess what?  The numbers are already looking pretty good but not that good!

According to a Reiters story today, “The Labor Department said the U.S. economy added 431,000 jobs in May — far short of the 513,000 that Wall Street had expected. The unemployment rate dropped to 9.7 percent in May from 9.9 percent in April.”  (Click here for the complete Reuters story.)

But here’s how Reuters reported the job picture earlier this week: New claims for unemployment insurance also fell last week, leaving investors braced for more good news on Friday, when the government’s employment report is expected to show the economy added more jobs in May than at any time since September 1983.  “I think these reports show the labor market is in fact stabilizing. (Private employment) was slightly weaker than expected but foreshadows a good number tomorrow,” said John Doyle, currency strategist at Tempus Consulting in Washington.  Consumers appeared withhold judgment about the job market, though, as U.S. retailers reported lackluster sales in May.  (Click here for the complete Reuters story)

Payroll numbers were expected by many analysts to exceed 500,000 new hires.  We of course did not surpass that figure but we got close.  How did we get those jobs in the middle of a bad recession?   John Williams of shadowstats.com is looking closely at the hiring of census workers, and he says, “. . . close to 420,000 will be from the hiring of temporary and intermittent census workers.  I expect payroll gains, net of census workers, to be well below the 80,000 to 90,000 balance needed to meet consensus, perhaps even showing outright contraction. At work here increasingly will be an intensifying economic downturn . . .” In other words, these reports make things look better than they really are.  Expect things to get worse before they get better.

Tyler Durden of Zero Hedge put it much harsher in a report he did earlier this week.  His headline read “Looking For A Fake 700,000 May Non-Farm Payroll Number.”  Durden says the census workers and Bureau of Labor Statistics “Birth/Death Adjustments” are “voodoo math and double counting.”  Which brings Druden to this conclusion, “Retaining the same level of statistical adjustment, and the May NFP number will be at 700,000 before even one real full-time person has been added to the economy in the month of May!” (Click here for the complete zerohedge.com story)  Of course, it did not even get close, but I feel Durden’s frustration with bogus government jobs numbers almost every month!  I feel taxpayers basically pay BLS to lie to us about what is really going on.

I am happy for anyone who gets a job in this economy, even a temporary census job.  But a few jobs created by the government or the private sector does not make for a real turnaround in the economy.  There are some pretty big anchors holding the economy underwater.  Let me remind you of just a few:  Cities and states in the U.S. are basically bankrupt.  Entire countries in Europe are basically bankrupt.  Foreclosures of residential real estate are hitting new records year after year.  Nearly 80 banks have failed so far this year, and the FDIC is $20 billion in the hole.  The FDIC is also expecting to spend $40 billion more closing banks over the next 12 months alone!   Have we all forgotten we are fighting 2 very expensive wars!  The newest lead weight is the gigantic mess in the Gulf.  Just this week, the President said there was, “damage that could last for decades.”    Until all the debt is washed out of the economy, there will not be a meaningful turnaround.  All the hype around a glimmer of good news about jobs is just setting the public up for an immense letdown.