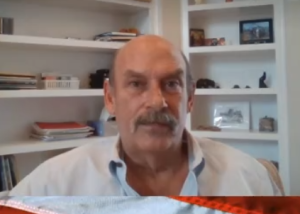 Financial writer and precious metals expert Bill Holter has long predicted the bloated indebted financial system, at some point, was going to go down.  According to Holter, the wait is over, and he says, “It’s imploding now.  When will it fully go down?  It could be few days a few weeks or maybe a few months, but the system is coming down now. ”

The $62 trillion “Ponzi scheme” real estate market in China is imploding and reportedly has at least $6 trillion in sour debt.  In America and the rest of the world, they are printing more just to keep the system afloat.  It’s in the process of sinking, and that could unleash a financial crash no one alive has ever seen before.  There is big unretractable inflation, labor shortages and severe supply chain disruptions, and it’s going to get worse.  It’s a nightmare of deflation and inflation at the same time.  Holter explains, “In Chinese real estate, the volume has dried up and prices are now following.  That’s obviously a deflation.  Just look worldwide at goods that people need like food and basics.  There is inflation everywhere throughout the entire world.  That inflation is a function of the money supply that has been pumped into the system. . . . Now, the problem is central banks have put too much money into the system, and you are obviously seeing the inflation . . . . 35% of all dollars outstanding today have been created in the last 12 months.”

Holter paints a picture of a near perfect storm for crashing the economy while inflation has been set on fire.  The labor situation is just throwing gas on the inflation fire.  Holter points out, “Of course, inflation is being exacerbated now by the supply chain problems.  You had economies start and stop and start and stop all over the world.  That hurt supply chains.  Now, you have these ridiculous mandates where people value their lives more than they value getting stuck with a clot shot.  So, you’ve got workers that are walking off in the middle of a supply chain crunch only making it worse.”

In closing, Holter says, “At this point, every day you wake up you are only 72 hours away from anarchy.  The reason being is 72 hours is three days.  A person can go three days without food and then pretty much lose it. . . . If you have a system that goes down and store shelves are empty or stores are closed or whatever, you are going to see anarchy. . . . Compared to two years ago, this is night and day.  We are on the doorstep of total tyranny, and at the same time, you have supply problems and obvious financial problems.  You have a broke U.S. Treasury talking about spending another $5 trillion.  Really?  Where is the $5 trillion going to come from?   Oh, we’ll just print it.”

Holter’s advice, “Buy real stuff now,” and “stock up on everything you think you are going to need for the next few years.” Holter also likes gold and silver, especially silver because “it is the most undervalued asset on the planet.” (There is much more in the 34 min. interview.)

There is much free information and analysis on JSMineset.com. If you want to become a subscriber to cutting edge original analysis and articles, click here.