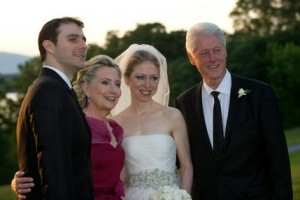 It is not unusual for members of the diminishing upper middle class to drop $20,000 or $30,000 on a big wedding. But for celebrities this large sum wouldn’t cover the wedding dress or the flowers.

The marriages of Madonna and film director Guy Ritchie, Tiger Woods and Elin Nordegren, and Michael Douglas and Catherine Zeta-Jones pushed up the cost of celebrity marriages to $1.5 million.

Now comes the politicians’s daughter as celebrity. According to news reports, Chelsea Clinton’s wedding to investment banker Mark Mezvinsky on July 31 is costing papa Bill $3,000,000. According to the London Daily Mail, the total price tag will be about $5,000,000. The additional $2,000,000 apparently is being laid off on US Taxpayers as Secret Service costs for protecting former president Clinton and foreign heads of state, such as the presidents of France and Italy and former British Prime Minister Tony Blair, who are among the 500 invited guests along with Barbara Streisand, Steven Spielberg, Oprah Winfrey, Ted Turner, and Clinton friend and donor Denise Rich, wife of the Clinton-pardoned felon.

Before we attend to the poor political judgment of such an extravagant affair during times of economic distress, let us wonder aloud where a poor boy who became governor of Arkansas and president of the United States got such a fortune that he can blow $3,000,000 on a wedding.

The American people did not take up a collection to reward him for his service to them.
Where did the money come from? Who was he really serving during his eight years in office?

How did Tony Blair and his wife, Cherrie, end up with an annual income of ten million pounds (approximately $15 million dollars) as soon as he left office? Who was Blair really serving?

These are not polite questions, and they are infrequently asked.

While Chelsea’s wedding guests eat a $11,000 wedding cake and admire $250,000 floral displays, Lisa Roberts in Ohio is struggling to raise contributions for her food pantry in order to feed 3,000 local people, whose financial independence was destroyed by investment bankers, job offshoring, and unaffordable wars. The Americans dependent on Lisa Roberts’ food pantry are living out of vans and cars. Those with a house roof still over their heads are packed in as many as 14 per household according to the Chillicothe Gazette in Ohio.

The Chilicothe Gazette reports that Lisa Roberts’ food pantry has “had to cut back to half rations per person in order to have something for everyone who needed it.”

Theresa DePugh stepped up to the challenge and had the starving Ohioans write messages on their food pantry paper plates to President Obama, who has just obtained another $33 billion to squander on a pointless war in Afghanistan that serves no purpose whatsoever except the enrichment of the military/security complex and its shareholders.

The Guardian (UK) reports that according to US government reports, one million American children go to bed hungry, while the Obama regime squanders hundreds of billions of dollars killing women and children in Afghanistan and elsewhere.

The Guardian’s reporting relies on a US government report from the US Department of Agriculture, which concludes that 50 million people in the US–one in six of the population–were unable to afford to buy sufficient food to stay healthy in 2008.

US Department of Agriculture Secretary Tom Vilsack said that he expected the number of hungry Americans to worsen when the survey for 2010 is released.

The world has not witnessed such total failure of government since the final days of the Roman Empire. A handful of American oligarchs are becoming mega-billionaires while the rest of the country goes down the drain.

And the American sheeple remain acquiescent.

Paul Craig Roberts was an editor of the Wall Street Journal and an Assistant Secretary of the U.S. Treasury.  His latest book, HOW THE ECONOMY WAS LOST, has just been published by CounterPunch/AK Press. He can be reached at: [email protected]