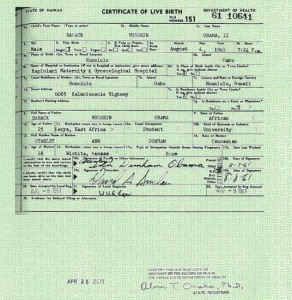 About a month ago, renowned Arizona Sheriff Joe Arpaio made an astounding claim in a public press conference, “A six month long investigation conducted by my cold case posse has lead me to believe there is probable cause to believe that President Barack Obama’s long-form birth certificate released by the White House on April 27, 2011, is a computer-generated forgery,” said Arpaio.  The Maricopa County Sheriff claimed President Obama’s Hawaiian selective-service card was, also, “most likely a forgery.”  (Click here for the complete press release from the Maricopa County Arizona Sheriff’s office.  This includes 6 videos explaining the Obama birth certificate investigation.)

From what I can tell, every single mainstream media (MSM) outlet covered this press conference.  CBS, NBC, ABC, FOX, CNN, Wall Street Journal, New York Times and many more all covered this story at the very beginning of March.  Then, poof—the coverage stopped.  (Click here for the complete unedited press conference where reporters were shown video of how Arpaio’s investigators allege forgery in President Obama’s birth certificate.)  My question is why?  This story has profound implications that might question the legitimacy of Barak Obama’s presidency and the entire vetting process for the nation’s highest office.

It seems the MSM has discounted this as a ploy to divert attention from a federal civil rights investigation.  MSNBC reported, “Arpaio’s probe comes amid a federal grand jury investigation into the sheriff’s office on criminal abuse-of-power allegations since at least December 2009, focusing on the sheriff’s anti-public corruption squad. Separately, the U.S. Justice Department has accused Arpaio’s office of racially profiling Latinos, basing immigration enforcement on racially charged citizen complaints and punishing Hispanic jail inmates for speaking Spanish. Arpaio denies the allegations . . .”   Political deflection was a common theme from all the MSM stories I researched and read.   Arpaio, also, denies the Obama birth certificate investigation is politically motivated and that he is not “going after Obama.”  Arpaio said he’s just doing his job.  (Click here for the complete MSNBC story.)

Another common theme was the use of the term “widely debunked.”  Politico.com reported, “Although objections to the authenticity of the president’s birth certificate have been widely debunked, some conservatives continue to make the country of the president’s birth an issue.”  (Click here for the complete Politico.com story.)  So, the MSM is really saying two things here:  (1) Sheriff Arpiao is doing this for political pay-back or to distract from his federal civil rights investigation.  (2) This is an old story, and it’s already been proven to be false.

First of all, if this is political ploy, then Sheriff Arpaio is totally out of line, and this is an abuse of his power as a law enforcement official.  The MSM should come down hard and completely destroy him by looking at the video evidence he has made public.  This should be easy.  I am a former investigative correspondent.  I worked for both ABC News and CNN for nearly nine years.  This can be done cheaply and without much of a budget.  The MSM can hire their own forensic computer investigators and refute the Sheriff’s claims and embarrass him on the national stage.  Shouldn’t the MSM do this out of respect for the Presidency?  After all, the inference was solidly made by the MSM that these charges are false and this is just a political stunt.

When billionaire Donald Trump brought up the birth certificate issue, early last year, the MSM pounced on him, and Trump was indicted as a “racist.” (Click here and here.)  Trump got snickers, eye rolls and questioned about the seriousness of his presidential run.  (Click here for more from NBC anchors interviewing Trump.)  The verbal and written beat-down from the MSM went on for months.  When it comes to Sheriff Arpaio’s stunning claim that the birth certificate the White House released is a “forgery,” we hear nothing past the original press conference.  Donald Trump makes more in a day than Arpaio makes in year, and the MSM had no problem taking Trump to task over the birth certificate issue.  Why not take on a financial pip-squeak like Arpaio?  What gives?

When it comes to the common theme of “widely debunked” by the MSM, I say really?  This has not been “widely debunked”!  The release of the Obama birth certificate was supposed to put an end to the controversy.  This story has gone on for years because no one ever saw the President’s birth certificate until it was released on the White House website.  (Click here.)   This is not mere speculation about a mysterious birth certificate that was hidden somewhere out of the public’s view.  This is a new charge that clearly states the birth certificate the President released is a “ computer-generated forgery.”  Arpaio’s claim is anything but “widely debunked.”  If the MSM wanted to debunk this chapter of the saga, it would analyze the public evidence (released by Arpaio’s office) and tear it apart, but that is not what is happening.  The MSM, as far as I can tell, is not even interviewing Sheriff Arpaio or writing about the investigation that it clearly thinks is a fraud on the public.  By the way, none of the many MSM stories I read told the public that the entire Arpaio case is online for anyone to view.  I think that is a pretty important fact to omit, don’t you.  (Click here to see the Obama birth certificate investigation case and videos just in case you missed this link at the top of this story.)

Where are 60 Minutes and Steve Croft?  Where are ABC and Brian Ross?  Where are the “fair and balanced” reporters at FOX?  Where are all the investigative reporters and editors of IRE?  This is an easy story to disprove.  It has been a month, and I see zippo, nada, zero investigation of these outrageous claims that can shake the very foundation of the nation.  I’ve long thought President was born in Hawaii, but now, because of the way the MSM is handling this, I don’t know what to think.  The mainstream media still has enormous power to indict or ignore.  In this case, their silence is deafening.