Home
»
Political Analysis
»
Where Are We? 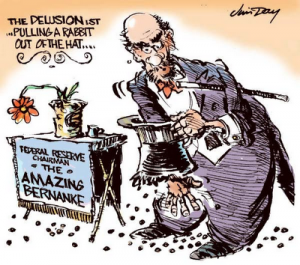 Yesterday, the Dow was up more than 300 points, and gold hit another all-time high before dropping nearly $100 an ounce.  You would think the stock market was back and the gold trade was over.  Wall Street is excited about recent bad economic news that just may force Fed Chief Ben Bernanke to start a third round of quantitative easing (QE3).  I hate to break it to Wall Street, but QE3 is already underway in the form of 2 years of guaranteed near 0% interest rates.

That’s the close up of the economy.  The wide shot reveals something much more profound and dangerous for anyone who does not know which direction the giant economic cruise ship is turning.  The problem the world faces today is crushing debt.  In America, it is at the local, state and federal level.  On top of that, there have been many promises made in the form of retirement and health care.  In Europe, the same thing, except there the problem is more immediate and dire.  The fate of the European Union hangs in the balance.

There has never been a time in history when debt problems globally have been this monstrous.  At the beginning of the year, I quoted 87 year old Harry Schultz.  He is now retired but is widely respected for his economic and market calls.  In his last newsletter, Schultz summed up the calamity we face by saying, “Roughly speaking, the mess we are in is the worst since 17th century financial collapse. Comparisons with the 1930’s are ludicrous. We’ve gone far beyond that. And, alas, the courage & political will to recognize the mess & act wisely to reverse gears, is absent in U.S. leadership, where the problems were hatched & where the rot is by far the deepest.”  (Click here to read my original post from January 2011.)

David Knox Barker, who wrote “Jubilee on Wall Street: An Optimistic Look at the Global Financial Crash,” echoes Schultz.  Enormous problems will usher in equally enormous changes.  Barker said this week, “The final plunge of this long wave winter season is now underway. The international political economy, which has lost its moorings in individual accountability, responsibility and purpose, is breaking up. Socialism in all its forms, including the global banking system that is dependent on the government dole, is collapsing from the weight of its internal contradictions. Socialism is going through an extinction event in the final years of this long wave, receiving its just reward from the crushing long wave forces that it has magnified around the globe.”  (Click here to read the complete article by Mr. Barker.)

The socialist state would not be possible without sovereign debt.  One of the best examples is the good old US of A which spends about 43 cents more than it collects in taxes.  According to economist Martin Armstrong, the prospects of fixing the problem before it blows up are small.  Last week he wrote, “The threat we face in a Sovereign Debt Default scenario is more of the destruction of capital and that is DEFLATIONARY rather than inflationary. So people cheering the downgrade of the US debt had better be careful what they wish for. If the debt structure collapses BEFORE reform (more likely than not), this will wipe out the pension funds, insurance companies, and banks. The debt will be suspended and at that point the challenge will be putting it back together before CIVIL WAR.”

Martin Armstrong invented something called the “Economic Confidence Model.”  He discovered the economy and politics move in specific cycles.  He has made many spot-on market timing calls based on his mathematical calculations.  He has had legal problems that put him in jail for a number of years, but this makes him no less brilliant.  (Click here to read more about this complicated case and what has been called unfair imprisonment.)  Armstrong consults for the ultra-wealthy.  Some of his clients manage $1trillion in assets.  He is a real player who knows what he is talking about.  Armstrong goes on to say, “We are headed into an economic storm where the sun doesn’t shine on the horizon. For all the conspiracy theories that convince the world some brilliant men are planning everything, when my phone rings, why are they asking me what’s happening? The sad truth is far worse. When you pull the curtain back, you suddenly find smoke and mirrors with nobody in charge and the whole thing is really just a runaway train and there is no conductor. That is much more dangerous than some enlightened group with a plan.”  (Click here for the complete Armstrong post.)  Armstrong contends in either inflation or deflation, gold will offer the best protection.

What is happening is nothing short of a reevaluation of money, and thus we see gold breaking new all-time highs.  In his latest post, Jim Willie of Goldenjackass.com gives this warning to the common man about the perils of holding cash.  Willie said, “Prepare to protect your personal wealth during the grandest transfer of wealth in modern history, from toxic paper to reliable hard metal with no counter-party risk. Money is in the process of being invalidated and redefined. The Paradigm Shift continues at work.” (Click here for the complete Jim Willie post.)

So, we are at the edge of a cliff in this grand cycle.  It is said, it is not the long fall that can kill you, but the quick stop.