Home
»
Market Analysis
»
Will Raising the Debt Ceiling Bail Out the Banks, Again? 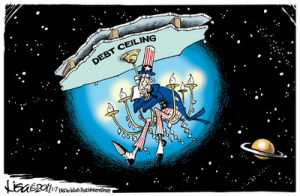