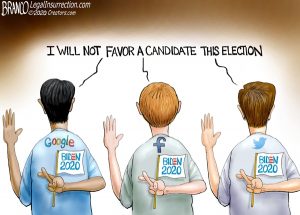 The massive psyop from the mainstream media (MSM) and the so-called “Masters of the Universe” in the tech industry are intensifying.  Twitter accounts of major conservative figures are being suspended, scientific videos are being scrubbed from the Internet and search results for conservative websites are being demolished.  All the while, top tech CEO’s testified in front of Congress and said conservative censorship is not happening.  It is happening.  Bought and paid for Congress, on both sides of the isle, are not doing anything but accepting campaign cash to sell out America.  This intense psyop is all in an effort to defeat President Trump in November.

More “peaceful” violence was brewing in Seattle when a van of explosives and other weapons was found by police.  This is more of the same kind of thing that is continuing, which is violent attacks to have a Marxist/communist overthrow of the government of America.  If you want this sort of thing to stop, then stop voting Democrat.  The Dem Party has clearly moved to be radical Marxists in large part because that’s where the money is coming from.

Another 1.4 million Americans filed for unemployment this week.  The number is well over 50 million, and that is why Congress is going to have yet another Covid 19 stimulus package.  The extra $600 per week unemployment benefit is expiring as is the moratorium on evictions.  On a brighter note, gold is hitting all-time highs as the Fed and Congress spend newly printed money like drunken sailors.  We are about 90 days to the November 3rd election, and there are many economic wild cards in play.

Jonathan Cahn, best–selling author of “The Harbinger” (and several other books), will be the guest for the Saturday Night Post.  His new blockbuster picks up where “The Harbinger” left off.  It’s simply called “The Harbinger II The Return.”