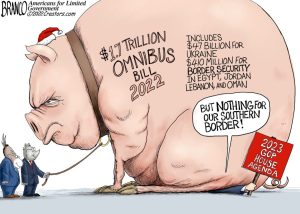 The money for more war in Ukraine keeps flowing out of the U.S. Congress.  The Senate passed a monster pork spending package called the Omnibus bill.  It was nearly $1.7 trillion.  In that pork bucket was another $45 billion for the money laundering scheme that is Ukraine.  They say they need it to fight the invading Russians, but not a dime for the invaders on the Southern U.S. border.  Meanwhile, Putin is upgrading his nuclear arsenal.  Does anybody in Congress see a problem coming here?  Idiots and criminals are in charge of the federal government.

Every week there are dozens of people who “die suddenly.”  There are blogs that track this phenomenon all around the world.  Of course, it’s people dying from the CV19 bioweapon, but you will never hear this from the Lying Legacy Media (LLM).  The LLM told everyone to take the injection and that it was “safe and effective.”   That was a lie, and everyone involved in this clear genocide is trying to cover it up including the CDC.   No matter how hard they all try, what is coming is a mass awakening to the deadly and debilitating scam they passed off as a vaccine.  Just ask vax proponent Academy Award winning actor Tim Robbins if he still believes in the clot shots—spoiler alert– he does not.  What does that say about the rest of Hollywood?  Do you think he has a few friends that think the same way he does?

The economy is plunging.  The economic signals are the same as they were before the Great Recession in 2008 and 2009.  Meanwhile, the Fed is on a course to continue to raise rates.  There is no so-called Fed pivot.  There is just a plunge to the downside, and the used car market is reflecting this trend with a massive new wave of car repossessions.

There is much more in the 57-min. newscast.

Join Greg Hunter of USAWatchdog.com as he talks about these stories and more in the Weekly News Wrap-Up for 12.23.24.

Biotech analyst Karen Kingston will be the guest for the Saturday Night Post.  Kingston has more new information that shows the evil vax will kill and injure mass amounts of people.  We have a long way to go before it’s over.