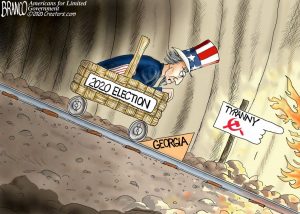 More this week on the 2020 election fraud, this time in Georgia, and, yes, there was more proof and lots of it.  We find that Georgia voting machines were sending information to China, ballots were being shredded and people were caught on camera running the same stacks of  ballots through the counting machines three and four times.  If that’s not election fraud, I don’t know what is.  As more and more fraud is exposed, the cover-up grows more and more desperate.  More than just voter fraud is being revealed, and it looks like treason and sedition.

The Marxists on the Left would like you to think the election is over and everybody will just have to choke down the massive fraud.  After all, the Deep State globalist Democrats cheated Joe and others in fair and square—right?  The fight is far from over, and each revelation of more fraud and crime destroys the myth that Joe Biden actually won.  Keep your faith because this fight is far from over.  God the Father and his Son Jesus are firmly in control.  Evil has already been judged, and now it’s time for the sentencing.  Biden lost in a landslide, the massive fraud just covered it up.

Gold and silver are up for the year, and Bitcoin is way up.  What is going on?  Is this the year the dollar falls and falls big time because of all the money printing and election chaos?  The U.S. dollar is already off more than 5% since Election Day.  Will the plunge intensify in 2021?

Join Greg Hunter of USAWatchdog.com as he talks about the year ahead in the Weekly News Wrap-Up.

Have a Happy New Year, and please continue to “Fear Not.”   They want you to be afraid—Don’t Be!!