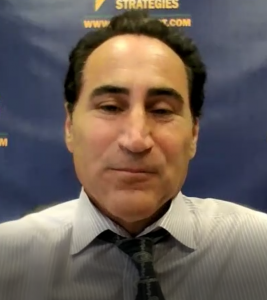 Can we keep partying in the markets like it’s 1999 or is there an expiration date for the good times? Pento says, “Well, I have put a check on the calendar for October because of the fact the rate of quantitative easing goes to $15 billion per year, because the trade war will reach a crescendo, then because I believe, unfortunately because I am conservative, the Republicans lose the House of Representatives, because the Chinese credit boom will be in full reverse by October. It is a confluence of events coming in October . . . we’ve already entered into the beginnings of a bear market around the world. The top 22 banks in the world are in a bear market. There are many, many examples of banks around the world that are in a bear market. You have a bear market in Chinese shares. 20% of the S&P 500 is in a bear market. This is an incipient bear market that is already beginning. I believe it manifests clearly to even the people on CNBC by October.”

Where is there going to be the biggest trouble? Pento says, “I have identified the nucleus of the next recession/depression to be corporate debt and not the housing market. We have a record amount of corporate debt outstanding right now. It is 45% of GDP. It has never ever been higher, but the quality of that debt . . . BBB, which is the lowest rung . . . of investment grade debt accounts for 50% of investment grade. The number of zombie companies is at a record high. . . . So, there is a record amount of debt, the quality of the debt is at a record low, and you have a record amount of companies just existing as zombies. They have to issue debt to pay back existing debt. . . . The amount of zombie companies is going to surge when we get the next recession. The amount of credit defaults is going to surge. . . . The construct of corporate debt is so dangerous that when we hit a recession, defaults are going to skyrocket like we have never seen before. You will be talking about the layoffs and the plunge in the market and economic growth on a global basis.”

Pento also predicts, “The U.S. is not an island. The U.S. is not going to have 4% GDP growth while the rest of the world implodes. . . . I look at the data, and data says this is the most dangerous market ever. This is the most precarious GDP on a global basis that we have ever had. Global central banks have never before printed $12 trillion. . . . We have never before had that happen, and the reason why they did it is to take sovereign debt into zero and negative territory so we can go on this inflation quest so asset prices don’t implode. That is all turned on its head. They have reached their inflation and it’s starting to unwind, and this whole thing is going to collapse. When it collapses, the primary beneficiary is going to be the gold market. . . . You should always have 5% to 10%, and if you are waiting, you are running out of time to get it cheaply. . . . I don’t think there is much downside to buying physical gold here, and you are running out of time if you have no position at all.”

(This interview will talk about the coming recession and the inverting yield curve, record amounts of corporate debt and gold and silver in physical form as financial protection.)

Michael Pento added another omen for the markets. Pento says, “NYSE margin debt is at record high levels and cash is at record low levels. This means people will be wiped out more quickly and more thoroughly than ever before.”

There is free information, analysis and podcasts on PentoPort.com.