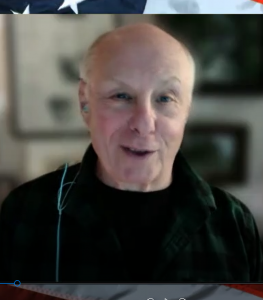 Renowned author and journalist James Howard Kunstler thinks what has been happening for the last few years with the mainstream media’s coverage of President Trump borders on criminal activity. Kunstler explains, “What I am waiting for is if and when indictments come down from Mr. Barr and Mr. Durham.  I am wondering whether the editors and publishers of the Washington Post and New York Times and the producers at CNN and MSNBC are going to be named as unindicted co-conspirators in this effort to gaslight the country and really stage a coup to remove the President and to nullify the 2016 election. I say this as someone who is not necessarily a Trump supporter. I didn’t vote for the guy. I am not a cheerleader for the guy, but basically, I think the behavior of his antagonists has been much worse and much more dangerous for the nation and the American project as a long term matter.  I really need to see some action to hold people responsible for the acts they have committed. . . . I am not an attorney, and I have never worked for the Department of Justice, but it seems to me that by naming the publishers and editors of these companies as unindicted co-conspirators, that allows you to avoid the appearance of trying to shut down the press because you are not going to put them in jail, but you are going  to put them in disrepute. That may prompt their boards of directors to fire a few people and maybe change the way they do business at these places.”

Kunstler says things look unlike anything we have seen in the past because we are approaching a day of reckoning in our debt based monetary system. Kunstler says, “Yeah, I think you can see it happening now. What seems to be resolving is some movement to some sort of a crackup of the banking system. What we are really stuck in is a situation where we’ve got too many obligations we cannot meet and too many debts that will never be repaid. We have been trying to run the country for the past 15 or 20 years on debt because we can no longer provide the kind of industrial growth that we have been used to . . . and have this massive consumer spending industry. So, we have been borrowing from the future to pay our bills today, and we are running out of our ability to borrow more. . . . I think we are going to lose the ability to support a lot of activities that we have been doing. It starts with energy and its relationship to banking and our ability to generate the kind of growth you need to keep rolling over debt. The reason debt will never be paid and obligations will never be met is we are not generating that sort of growth. We’re just generating frauds and swindles. Frauds and swindles are fun while you are doing them, and they seem to produce a lot of paper profits, but after a while, they prove to be false. Then you have to do something else.  A great deal about our economy and our way of life is false and is going to fail. Then we are going to have to make other arrangements for daily life. . . .It will probably mean we will be organizing our stuff at much more of a local scale.”

On the 2020 Presidential Election, Kunstler predicts, “When all is said and done, I am not convinced there is enough there to convict President Trump of anything. At the same time, there is probably going to be a lot of legal actions brought against the people who started this coup against him, and that’s going to be extremely disturbing to the Left. I think one of the possibilities is we may not have a 2020 election. In some way or another, the country may be so disorderly that we can’t hold an election. There may be so much strife that we cannot handle the legal questions around holding the election, and it may be suspended. I don’t know what that means, but I am very impressed of the disorder that we are already in. It’s more of a kind of mental disorder between the parties, but it could turn into a lot of kinetic disorder on the ground and a lot of institutional failure.”

(To Donate to USAWatchdog.com Click Here) (You Tube Demonetization update:  After two days with little or no monetization in this video, You Tube sent me the following email at 6:12 am that reads: “Great news! After manually reviewing your video, we’ve determined that it is suitable for all advertisers:” “Great News” after you robbed me of money and got my work for next to nothing?  So, it was good the whole time you withheld advertising?  YouTube is incompetent, evil or both. Enjoy!)

James Howard Kunstler is a prolific writer, and you can enjoy his work and analysis for free at Kunstler.com. If you want to buy one of the 23 books he has written, click here to shop.