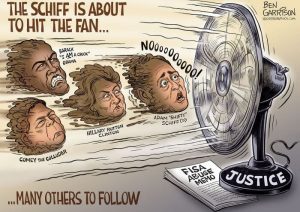 The mainstream media (MSM) is finally beginning to cover the FBI/DOJ scandal to attack President Trump and his Administration, but they are doing it as a big “conspiracy theory” in the face of overwhelming publicly reported evidence of corruption and law breaking.

Senator Ron Johnson stated this week there was a “secret society” within the FBI and DOJ that has off site meetings “to map out survival strategy at the FBI.”  Other Congressmen, who have seen an unreleased memo naming names of high ranking members of the FBO and DOJ, say jail time is coming for many because of corruption and crime.  The crimes they are referring to involve exonerating Hillary Clinton in the face of obvious law breaking and attacking the Trump Administration with a phony dossier paid for by Hillary Clinton.

Mark Taylor, author of “The Trump Prophecies,” will be the guest for the “Early Sunday Release.”