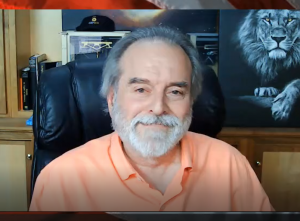 Renowned radio host, filmmaker and book author Steve Quayle predicts, “The next six months will be the most perilous in the history of America. . . . It’s not a prediction, you are seeing it right now.  Three years ago at my ‘True Legends’ conference, I said from this conference date on, the word ‘normal’ will never be used again.  I also said every expectation that you have known as normal in the coming months and years will change forever.  There is no going back to normal.  It doesn’t exist.  Most people don’t even know what has changed, but when you can’t eat, you don’t have a job, you have to depend on $600 per week from the government, the restaurants you used to eat at are closed and 166,000 business closed, I say ladies and gentlemen, this is the most important time.”

Quayle also warns of profound earth changes, such as earth quakes and volcanos, that have recently increased in activity worldwide.  Quayle explains, “I sometimes think we get too focused on the political, and we forget to see the big picture.  The big picture is earthquakes are changing the face of the planet, and the volcanos are changing the temperature of the earth.  This will all come to the point that we are going to be facing famine geologically induced by nature. Most people don’t even have this on their radar yet.  Stacking volcanos or triplet volcanos since July have been hitting 7.2 and 7.3 magnitude in Papua, New Guinea.  When I am talking about ‘stacking’ earthquakes, I am not talking about aftershocks . . . this means three specific earthquakes being generated . . . and that is really significant. . . . These are major quakes and not little tremors.  You have been seeing this on the so-called ‘Ring of Fire’ until three days ago.  On September 18, the Mid-Atlantic Ridge starting having these multiple earthquakes—major quakes.  When there is a big earthquake on the Mid-Atlantic Ridge, and this is why we are talking about this, that (dead) volcano slides into the ocean, and then you’ve got the East Coast tsunami. . . . The San Andreas Fault is little league compared to what I am talking about. . . . This could affect the East Coast in a deadly and dangerous way. . . . We are talking about a 500 mile per hour tsunami or tidal wave going inland for up to 100 miles. . . . In Matthew 24 of the Bible, Jesus talks about this.  Jesus said there would be earthquakes in diverse places.  Men’s hearts would be failing them for fear of those things coming upon the earth.”

Quayle says his sources say that academic and government experts are “being muzzled so as not to cause a panic. . . . He says they have been forbidden to talk about this.”

Quayle says the most important commodity to have in the future is food.  Quayle says, “You better be buying canned food, no kidding.  It does not have to be refrigerated.”

Quayle says, “There are evil globalists and secret societies who want to set up the world for the Anti-Christ.  Anti-Christ means in place of Christ.”

Quayle also predicts, “America will endure a famine.  I also have said this, the greatest migration in the U.S. history will take place for fresh water.  It will be caused by drought, poisoning of the wells and earthquakes will fracture different areas and aquifers. . . .Don’t wait to panic.  You don’t need to worry about toilet paper.  You need to worry about nothing in your stomach.”

As far as the November Election, Quayle says, “I think this is going to end up in the streets of America.  I think Trump is going to win.  I think it’s going to be contested.  I see, prior to November 3rd, all hell breaking out.  I said this 25 years ago, and I see us going into a civil war. . . . The idea that there is a political solution to a spiritual problem is baloney.”

Join Greg Hunter as he talks to radio host, filmmaker and top selling author Steve Quayle as he talks about his upcoming video conference called “Final Warning, Brace for Impact.”

To sign up for the “Final Warning, Brace for Impact” video on demand conference on October 16 and 17, 2020, click here.