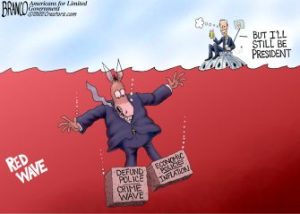 The Pentagon is now moving to use nuclear weapons even if the other side does not have them or does not use them.  No peace talks are being scheduled by either side in the Ukraine war.  Both Russia and the USA are holding nuclear armed missile exercises simultaneously.  This is the sort of thing that happened at the height of the cold war.  There is no end in sight to the tensions, and the US military testing new hypersonic weapons this week is not going to help lower them.

I have been telling you that Biden’s real poll numbers are so low (9%-12%) that the Democrats will have to cheat like never before.  The Dems are so far behind that the cheating is becoming extremely obvious.  Because of the reporting on alt media and films like “2,000 Mules,” people are on to the ways the election fraud and voter fraud is pulled off.  The Democrat party is turning on itself because the policies are not popular even with the staunchest blue voter.  The Democrats (and RINO Republicans) are funding the Ukraine war with billions of dollars in funding and massive amounts of military weapons.  Many Dems are upset with the leadership supporting the Nazis in Ukraine.  Dem voters are waking up to the fact that the new Democrat party is the party of war and maybe nuclear war.  It is a huge pinnacle wedge issue in the Democrat party, especially in places like New York City, which is #1 on the nuclear exchange hit list.  This is bad news for AOC in November.

The government said the U.S. economy grew at 2.6% in the third quarter, but economist John Williams, founder of Shadowstats.com, says this is nothing more that pre-election hogwash.  Williams says the real number is .5% growth, and the government is counting things like the $700 billion Inflation Reduction Act as GDP.  It’s bad everywhere, especially in Europe where the gas has been turned off and banks are quietly suffering from bank-runs from depositors.  The stock market may be up, but the real economy is getting worse, not better.  That’s why a new report shows 63% of Americans are living paycheck to paycheck.

There is much more in the 58-minute news cast.

Join Greg Hunter of USAWatchdog.com as he talks about these stories and more in the Weekly News Wrap-Up for 10/28/22.

(Video will play when finished processing at Rumble.)

World renowned microbiologist and virologist, professor Sucharit Bhakdi MD will be the guest for the Saturday Night Post.  Dr. Bhakdi will come on to talk about the deadly and debilitating effects of the CV19 vax.  The two big problems he sees center around the heart and brain.  Many have reported having problems in these areas.  If either of these get damaged from the injections, you are in big trouble.  He will explain why.