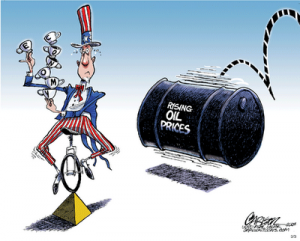 This weekend, violence continued to erupt in the Middle East.   In Libya, the Gaddafi government launched counter attacks against the rebels.  Many fear there is a full blown civil war brewing in that oil rich country.

Yemeni loyalists also staged counterattacks against anti-government protesters in hopes of dispersing them.  They used sticks and stones, but still, 25 people were reported injured. All is not quiet in Egypt this weekend as the peaceful revolution there turned violent.  Reuters is reporting, “Men in plain clothes armed with swords and petrol bombs attacked protesters in Cairo on Sunday night during a demonstration demanding reform of security services with a reputation for brutality, witnesses said.”  (Click here for the complete Reuters story.)

Even Saudi Arabia, the world’s 2nd biggest oil producer (Russia is now #1), is seeing protests gain momentum.  Officials are so worried, the security forces rounded up and detained nearly two dozen protesters in an effort to quell even the hint of revolution, but it may be too late.  Reuters reported yesterday, “More than 17,000 people backed a call on Facebook to hold two demonstrations in Saudi Arabia this month, the first one on Friday. A loose alliance of liberals, moderate Islamists and Shi’ites has petitioned King Abdullah to allow elections in the kingdom.” Keep in mind, public dissent is frowned upon in that part of the world.  (Click here to read the complete Reuters story.)

“Allow elections in the kingdom?” A few months ago that would have been unheard of, but now it is openly talked about.  Anyone who thought the trouble in the Middle East was going to be over quickly and quietly—forget it.  The problems are just getting started as well as the price increases at the gasoline pumps.  In the last 2 weeks alone, gas prices in the U.S. have jumped an average of 33 cents a gallon!  CNBC reported yesterday, “The Lundberg Survey of fuel prices released Sunday says it’s the second biggest price increase over a two-week span on record.  Analyst Trilby Lundberg found in the survey completed Friday that the average national price of a gallon of regular is $3.51.  The average price for mid-grade is $3.64, and premium was at $3.75.  Diesel is up 29 cents, to $3.88 a gallon.”  (Click here for the complete CNBC report.)

Please note, not only spiking gasoline prices, but diesel fuel as well.  Nearly $4 a gallon trucking fuel will undoubtedly cause shipping costs to rise, and, of course, high fuel prices for consumers will rob them of buying power.  This will be the proverbial “double whammy” for cash strapped shoppers trying to stay ahead of inflation.  The Obama administration is so spooked that it is already thinking about tapping the nation’s Strategic Petroleum Reserve (SPR) to try to push prices back down.  CBS News reported yesterday, White House chief of staff, William Daily, said, “The issue of the reserves is one we’re considering,” said William Daley. . . .”I think there is no one who doubts the uncertainty in the Middle East right now has caused this tremendous increase in the last couple of weeks.” (Click here to read the complete CBS News story.)

The Obama Administration might want to hold off on tapping reserve oil until there is a much clearer picture of the Middle East.  The U.S. may desperately need the SPR if war breaks out and further reduces or cuts off supplies.  As far as the oil price spike, according to an unscientific USAWatchdog.com poll of nearly 1,000 readers, more than 60% think gas prices will be $5.00 or more a gallon by this time next year.  I think a nation-wide average of $4 a gallon is a lock by summer.  No matter what, it looks like prices will go much higher before they go lower.  That will plunge the economy deeper into recession and may, finally, confirm a full blown depression before it’s all over.