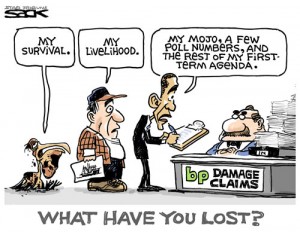 The possibility of a BP bankruptcy because of the ongoing Gulf oil spill is very real.  Since the oil spill disaster on April 20, the company’s share price has been cut in half.  BP has lost $90 billion in value for shareholders.  The company dividend has been diverted to help pay for stopping the out-of-control well, cleanup and damages.  At the beginning of this month, the President said, “Untold damage is being done to the environment — damage that could last for decades.” This broken well is spewing out an Exxon Valdez every 4 or 5 days, and experts say it will be at least 2 months before it is stopped. I talked about the possibility of a BP bankruptcy and its monster liabilities in a post three weeks ago called “Damage that Could Last for Decades.”

I am not the only one contemplating an insolvent BP.  Two weeks ago, renowned oil analyst Matthew Simmons said on CNBC, “BP won’t last the summer.” Simmons is one of the best in the oil patch, but if he’s correct, what would be the fallout?  (Click here for the article.)

A regular commenter to JSMineset.com thinks it would be worse for the world than the Lehman Brothers collapse! His code name is “Pedro.” Jim Sinclair, the creator and owner of JSMineset.com, told me “Pedro” is a major personality in the over-the-counter derivative side of energy.  He also said “Pedro” has impeccable credentials but uses a code name for fear of causing problems for his firm and himself for speaking the truth.  If BP goes under, Sinclair says the world economy will fall into a “black hole.” I think this is one of the most important things you will read this year.  Mr. Sinclair personally gave me permission to share it with the readers of USAWatchdog.com.  The letter below, to Jim Sinclair, reveals what is being talked about at the highest levels in the financial world.  Please take the time to read it all.

The BP crisis in the Gulf of Mexico has rightfully been analyzed from the ecological perspective. People’s lives and livelihoods are in grave danger. But that focus has equally masked something very serious from a financial perspective, in my opinion, that could lead to an acceleration of the crisis brought about by the Lehman implosion.

People are seriously underestimating how much liquidity in the global financial world is dependent on a solvent BP. BP extends credit – through trading and finance. They extend the amounts, quality and duration of credit a bank could only dream of. The Gold community should think about the financial muscle behind a company with 100+years of proven oil and gas reserves. Think about that in comparison with what a Bank, with few tangible assets, (truly, not allegedly) possesses. (No wonder they all started trading for a living!) Then think about what happens if BP goes under. This is no bank. With proven reserves and wells in the ground, equity in fields all over the planet, in terms of credit quality and credit provision–nothing, can match an oil major. God only knows how many assets around the planet are dependent on credit and finance extended from BP. It is likely to dwarf any Banking entity in multiples.

And at the heart of it all are those dreadful OTC Derivatives–again! Banks try and lean on major oil companies because they have exactly the kind of credit-worthiness that they themselves lack. In fact, major oil companies, conversely, spend large amounts of time both denying Banks credit and trying to get Bank risk off of their books in their trading operations. Oil companies have always mistrusted Bank creditworthiness and have largely considered the banking industry a bad financial joke. Conversely, Banks plead with oil companies to let them trade beyond one year in duration. Banks even used to do losing trades with Oil Companies simply to get them on their trading register…a foot in the door so that they could subsequently beg for an extension in credit size and duration. For the Banks, all trading was based on what the early derivatives giant, Bankers Trust, named their trading system: RAROC- or – Risk Adjusted Return on Credit. Trading is a function of credit bequeathed, mixed with the risk of the (trading) position. As trading and credit are intertwined, we might do well to remember what might happen to global liquidity and markets if BP suffers what many believe to be its deserved fate of bankruptcy. The Intercontinental Exchange (ICE) has already been and will be further undermined by BP’s distress. They are one of the only “hard asset” entities backing up this so-called “Exchange”.

If BP does go bust (regardless of it is deserved), and even if it just badly wounded and the US entity is allowed to fail, the long-term OTC Derivatives in the oil, refined products and natural gas markets that get nullified could be catastrophic. These will kick-back into the Banking system. BP is the primary player on the long-end of the energy curve. How exposed are Goldman…Morgan Stanley and JPM? Probably hugely. Now credit has been cut to BP. Counter-parties will not accept their name beyond one year in duration. This is unheard of. A Giant is on the ropes. If he falls, the very earth may shake as he hits the ground.

As we are beginning to see, the Western pension structure, financial trading and global credit are all inter-twined. BP is central to this, as a massive supplier of what many believe(d) to be AAA credit. So while we see Banks roll over and die, and Sovereign entities begin to falter… we now have a major oil company on the verge of going under. Another leg of the global economic “chair” is being vicious kicked out from under us. Ecological damage is not just an eco-event on its isolated own. It has been added to the list of man-made disasters jeopardizing the world economy. The price tag and resultant knock-on effects of a BP failure could easily be equal to that of a Lehman, if not more. It is surely, at the very least, Enron x 10.

All the counter-party risk associated with the current BP situation means the term curve of the global oil trade has likely shut down. Here we have yet another credit-based event causing a lock-up in markets that will now impede trade and commerce. It looks like an exact replication of the 2008 credit market seizure could ensue all over again – and it could probably be a lot worse. The world is in a far more delicate state now. Although never really discussed, the world is highly reliant on BP’s provision of long-term credit to many core industries. Who makes good on all the outstanding paper that so many smaller oil, gas and electricity companies, airlines, shipping companies, local bus, railway and transportation networks that rely on BP’s creditworthiness and performance for? It doesn’t take a genius to figure out how this could all unwind. If BP has to be bailed-out, like a bank, the system will have to print even more unimaginable amounts of money.

The market, intellectually lazy and slow to realization, as it often is, probably has not woken up to it yet – but the BP crisis could unleash damage similar to the Banking crisis. A BP failure through bankruptcy could make Lehman look small in comparison, and shake the financial house of cards we live in even more severely. If the implicit danger of the possibilities embedded in such an event doesn’t make an individual now turn towards Gold at full speed, it is likely that nothing will.