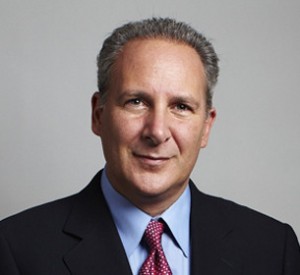 Money manager Peter Schiff says, “The stage has been set for a currency crisis and a sovereign debt crisis, and they’re going to come relatively soon.”  Schiff says the latest round of “unlimited” money printing by the Fed has only “postponed the collapse.”  Schiff, who recently wrote a book called “The Real Crash,” thinks, “The longer we wait, the worse it’s going to be.”  So, why don’t politicians do something to stop the collapse that many know is coming?  For one thing, Schiff says, “The political backlash will be enormous. . . . Nobody wants to be the messenger who gets shot because of the message.”  There is going to be a crisis dead ahead because, according to Schiff, “The dollar is vulnerable to a massive collapse . . . buy gold and silver.”  Join Greg Hunter as he goes One-on-One with Peter Schiff, the CEO of Euro Pacific Precious Metals.