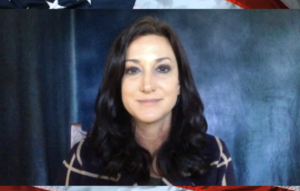 Karen Kingston is a biotech analyst and former Pfizer employee who understands the contracts, patents and laws that Big Pharma deals with in bringing new drugs to market. Kingston also researches and analyzes many aspects of Covid 19 and the so-called “vaccines.” Kingston says that data, government documents and patents show that the CV19 so-called “vaccine” is nothing more than a bioweapon. Kingston says this is how the everyone should view this injection that was forced onto an unsuspecting public. Kingston explains, “We need to call it what it is, and that is a bioweapon. Why is it important to call it a bioweapon? A vaccine is a biological agent. A biological agent that does not prevent infection, it doesn’t prevent disease and it wasn’t done under bona fide research, and the FDA admits it was not done under bona fide research. It causes diseases, disabilities and death. That is the definition of a bioweapon. . . . we need to explain to people this is a bioweapon. Why, because then we can get out of all this . . . vaccine law and we go into criminal law and criminal code. As a bioweapon,. there is no code, there is no law in the United States or in any nation that protects an organization from unleashing a bioweapon on a civilian population. It goes against the Geneva Code. There is nothing that protects them. . . . “We the People” need to start calling it what it is. It (CV19 vax) is a bioweapon. . . . There is no law that protects them. There is a military contract there, but it does not give them the right to murder people.”

Pfizer says its injection was 63% of all the CV19 bioweapon vaccines used in the world (nearly 13 billion CV19 injections). Kingston says, “The reason why Pfizer is public enemy number one is they have the greatest market share. They were calling the shots with the U.S. military. . . . In the Moderna contract, there is a clause that states you better make sure that patients are safe in your trials. It doesn’t say that in the Pfizer contract. That’s why we need to go after Pfizer because they are really acting like a criminal organization. It also looks like Pfizer is going to take ownership of all this bioweapon nanotechnology. . . . Pfizer . . . . is saying we took these 30 years of research, and we have turned it into a ‘new class of product.’ I think this ‘new class of product’ is a bioweapon because it is. It doesn’t prevent disease or infection, and it was not done under bona fide research, and it results in disease, disabilities and death. I am not saying do not go after Moderna and J&J because the more pressure we put on these three titans, the better, but Pfizer is public enemy number #1.”

Kingston says the data, patents and government documents show all the CV19 so called vaccines are bioweapons, and not a single person was helped by any of these injections.

There is much more in the 53-minute in-depth interview.

Join Greg Hunter of USAWatchdog.com as he goes One-on-One with biotech analyst Karen Kingston as she gives an update on the bioweapon injections and criminals behind them for 1.21.23.

To look at some of the data and documents Kingston shows to prove the CV19 vax is a criminal act of releasing a bioweapon on an unsuspecting public, go to the [email protected]

To support Kingston financially, you can become a subscriber by clicking here.
(Please help support the truth tellers.)

If you want to donate to Kingston electronically so she can continue informing the public, please click here.