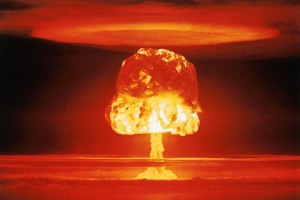 The situation in Greece is bleak.   Sure, the Prime Minister, George Papandreou survived a confidence vote yesterday, but he is a long way from solving the debt crisis in his tiny country.  The public debt totals $500 billion.  The plan is to add another $150 billion or so in debt.  It will be a second bailout package to keep the country afloat. In order to get the money, Greece will have to sell off state owned assets.  It must also give the people more financial pain in the form of even deeper cuts to government programs and entitlements.  That plan will surely spark more protests and civil unrest.  It comes down to a fight between the bankers that made reckless loans or the people who will suffer deep austerity for years.  In the end, one way or another, Greece will default.  The bankers are willing to pile on debt in hopes everything will get back to normal and they will get paid.  That is a pipe dream.

Even if the banks voluntarily let some of the debt rollover, it could lead to something equal to a default.  Reuters reported yesterday, “Fractious euro zone finance ministers are trying to patch together a second aid package for Greece, with more official loans and, for the first time, some sort of contribution by private investors who hold Greek government bonds.  ‘Fitch would regard such a debt exchange or voluntary debt rollover as a default event and would lead to the assignment of a default rating to Greece,’ Andrew Colquhoun, head of Asia-Pacific sovereign ratings with Fitch, said at a conference in Singapore.”  (Click here for the complete Reuters story.)

Last week, Jean-Claude Junker, President of the Euro Group and head of the 17 Eurozone finance ministers, warned of the dire consequences of a Greek default.  The Associated Press reported Saturday, Junker said a Greek bankruptcy, “could prove contagious for Portugal and Ireland, and then also for Belgium and Italy because of their high debt burden, even before Spain.  . . . We are playing with the fire. . . ” (Click her to read the complete AP story.) If Greece is forgiven debt or outright defaults, how long do you think it will take all those other countries to do the same thing?  My prediction is it would cause a daisy chain of defaulting debt that would reach critical mass in days.  “Playing with fire” is an understatement.  It is more like playing with debt nukes.

But, have no fear in the short run, according to economist John Williams of Shadowstats.com.  In a report last week, Williams said, “To the extent that Greece’s solvency crisis threatens systemic collapse, short-term funding solutions almost certainly will be found by the interested sovereign states and central banks, including particularly the U.S. Government and the Federal Reserve.  As seen in 2008, systemic failure will be avoided so long as it is possible to do so with the spending of whatever money needs to be created, or with the extension of whatever financial guarantees are needed.  Due to domestic political concerns, U.S. activity here likely will be covert—worked through a third party—or otherwise downplayed as much as possible.”

The real problem the world faces is not Greek debt because it is merely the dead canary in the world’s financial coal mine.  It is America that has terminal debt disease.  $12 trillion in liquid assets (things like dollars and Treasuries) are held outside of the U.S.  According to Williams, “. . . the U.S. dollar, which remains vulnerable to a massive sell-off with little or no further warning. . . .The crises facing the United States and the U.S. dollar dwarf those in the euro system. . .”

This is precisely why the guy who sits at the head of the world’s biggest bond fund, Bill Gross, says the U.S. is in “worse shape than Greece” and other heavily indebted European countries. Mr. Gross says the full extent of U.S. debt and liabilities are nearly “$100 trillion.” Now that’s a megaton debt nuke!  Mr. Gross also says that people investing in Treasuries will “get cooked.” Gross has sold off his U.S. Treasury holdings along with countries such as China.  Russia is the latest powerhouse to dump U.S. government debt.  TheStreet.com reported last week, “A top Russian economic official says his country is likely to continue decreasing the share of its portfolio that consists of U.S. debt, according to a published media report.  ‘The share of our portfolio in U.S. instruments has gone down and probably will go down further,’ said Arkady Dvorkovich, chief economic aide to Russian President Dmitry Medvedev, according to a report on The Wall Street Journal’s Web site.” (Click here to read the complete TheStreet.com report.)

Treasuries are really just an extension of the U.S. dollar.  After all, these bonds take your money today and pay you back dollars in the future.  The interest rate has to be high enough to compensate for inflation and turn a profit.  With the U.S. on a dollar printing orgy that is bailing out foreign and domestic banks, Treasury investors will be eaten up by inflation.  So, selling Treasuries is the same as dumping the buck.  If dollars are sold off rapidly, then the buying power of the once mighty dollar could evaporate like a puddle of water in the desert.