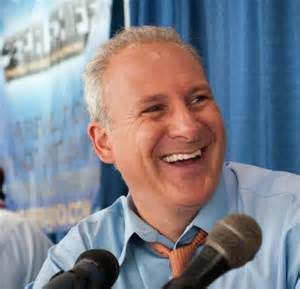 In Monday night’s first Presidential debate, Donald Trump criticized the Federal Reserve’s handling of the economy and warned, “. . . if you raise interest rates even a little bit, that’s going to come crashing down. We are in a big, fat, ugly bubble.” Money manager Peter Schiff explains, “Trump says if we raise rates, a lot of bad things are going to happen.  Then, he criticizes the Fed for keeping rates low.  So, which is it? He’s trying to have his cake and eat it too.  What Trump has to explain is low interest rates don’t help the economy.  Low interest rates are one of the biggest headwinds to the economy because all they do is inflate asset bubbles and prevent legitimate economic growth.  Donald Trump has to explain that rates have to go up, and when they do, it’s going to burst the bubble, and it’s not going to be fun.  If we are ever going to have a real recovery that’s going to produce a higher standard of living and good paying jobs . . . we are going to have to let this bubble deflate.  That means raising interest rates, and we are going to have to live with the consequences.  That means a collapsing stock market, a collapsing bond market, a collapsing real estate market and failing banks.  It’s a repeat of the 2008 financial crisis–only worse.”

So, how bad is it right now? Schiff contends, “We’ve got to come to terms with the fact that we are broke.  We borrowed more money that we can ever repay, and in the process, we have created a phony economy.  We have created a service sector economy.  We have enormous trade deficits, and they don’t result from bad trade deals. NAFTA is not the reason why we have these trade deficits.  It’s the Fed.  It’s the artificially low interest rates and the fact that we don’t have our own savings and investment capital.  It’s because of excess regulation and excess taxes that Hillary Clinton has promised to double down on. . . . We can’t raise interest rates without pricking the bubble.  We can’t have the gain without the short term pain, but, politically speaking, nobody has the stomach for that pain.  So, we never get the gain.”

On the Fed’s huge multi-trillion dollar bond portfolio, many years ago, Schiff predicted the Fed could not sell anything and only buy more bonds to prop up the markets. Schiff adds, “Here we are in 2016, and not only has the Fed not sold a single bond, every bond that has matured has been rolled over.  Every dime of interest they earned has been used to purchase more bonds.  So, they are trapped in the very monetary roach motel they were trapped in from day one.”

You can find Peter Schiff’s books on the Schiff Radio site by clicking here. Mr. Schiff’s YouTube channel is here, and, of course, you can get lots of free information on SchiffGold.com and Europac.com.