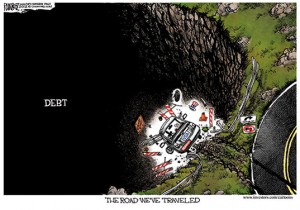 President Barak Obama gave a speech to newspaper executives about the recently passed Republican budget in the House of Representatives.  It proposes to cut spending by more than $5 trillion over the next ten years.  Yesterday’s speech was, basically, a declaration of war against the GOP and its vision of the government’s budget.  The President said, “This Congressional Republican budget is something different altogether. It is a Trojan horse disguised as deficit reduction plans. It is really an attempt to impose a radical vision on our country. It is thinly veiled social Darwinism. It is antithetical to our entire history as a land of opportunity and upward mobility for everybody who is willing to work for it. A place where prosperity doesn’t trickle down from the top but grows outward from the heart of middle class.”   (Click here for the full transcript of President Obama’s speech.)

It didn’t take long for the Republicans to fire back.  The AP reports, “House Speaker John Boehner said Obama is resorting to ‘distortions and partisan potshots’ — while standing behind policies that the speaker says ‘have made our country’s debt crisis worse.’  And a Mitt Romney spokeswoman says Obama’s in no position to lecture about ‘responsible federal spending.”  (Click here for more from the AP.)  Folks, it is officially “game on,” and every American should be scared speechless about this budget showdown.  It is unlike any the nation has ever faced.

The country has never been more in debt, and this comes at a time when countries like China are shunning U.S. Treasuries.  There are more than 12 million “officially unemployed.”  (The unofficial is 22 million.)  Home prices are falling despite near record low mortgage rates.   The BRICS nations are actively seeking an alternative to the U.S dollar for settlement of trade, which could threaten the dollar’s reserve currency status.  We are threatening financial war with any country that trades with Iran, and the nation is facing yet another shooting war in the Middle East.  The only question is will it come before or after the election.

Last August, Congress raised the debt ceiling by $2.1trillion in exchange for at least $2.1 trillion in budget cuts over the next 10 years.   A so-called “Super Committee” of Democrats and Republicans was supposed to agree on a deficit reduction plan, but they couldn’t agree on a single dime of spending cuts or tax increases.  That’s right, the deficit was not cut, but the nation went in the hole by another $2.1 trillion.  Currently, the deficit is more than $15.6 trillion, and the debt ceiling stands at nearly $16.4 trillion.  (Click here to see the U.S. debt clock.)  Some predict the U.S. will hit the debt ceiling or, better put, run out of money by September 2012— two months before the November election.  Zerohedge.com charted the trajectory of the nation’s debt a few weeks ago.

Can you see the budget battle shaping up in this election year?  Republicans will want deep cuts to social programs and not a lot of tax increases.  Democrats will want tax increases and to minimize cuts to social programs.  Neither side wants to give an inch, especially in an election year.  This is the exact same deadlock that took shape last year.  Now, both sides want to play political football with the nation’s finances, and the country is running out of time to get its financial house in order before we suffer the same fate as Greece.  This will be a monumental budget battle that may crush the nation as we know it.  I think it is a safe bet the next increase to the debt ceiling will be in the neighborhood of $2 trillion.

In the aftermath of the budget battle last year, the credit rating of the U.S. was downgraded.  There is no doubt it will be downgraded again.  Only this time, will the government, also, be shut down?  Will the dollar tumble in value?  Will the present administration take the money of federal retirement accounts to keep the country from falling into the black hole of insolvency?  Will the 47 million people on food stamps be cut off?  Will the stock market crash?  Will the government stop paying some or all of its bills?  Will this turn into a national security issue?  Will enemies of the U.S. attack while the donkeys and elephants play chicken with the lives and fortunes of more than 300 million Americans?  Will the coming budget war threaten America’s survival?  The answer to these questions may all be YES, and no one should be under the illusion that this nightmare could not become reality.  I’ve said it before, and I’ll say it again:  The country needs statesmen, but what we have are bagmen who are pandering to the special interests that fund them.