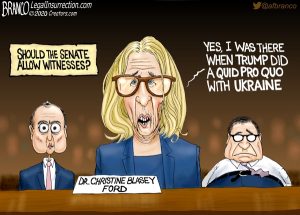 Why the Dems thought the sham impeachment was going to do better in the GOP controlled Senate, I’ll never know. It was a disaster in the House where Democrats had total unfair control, and it is an even bigger disaster in the Senate where Mitch McConnell and the Republicans are running the show. The House case on President Trump is so weak and fraudulent that it is doubtful even the staunchest Trump hating RINOs will vote in favor of removal.

Why are the Democrats pushing this sham impeachment that is basically a fraud on the Constitution? The Dems are panicked that their kickbacks, bribes and corruption will be exposed in a second Trump term. The Democrats do not have a serious candidate and do not have a serious plan to help make the lives of the ordinary person better. All they have is gun control, higher taxes for everyone and illegal immigration and free stuff given away to non-citizens who they want to vote illegally. The Trump wall is being built. So, the massive flood-the-zone with illegal voters strategy is sinking fast, too. Looks like the Dems will have to resort to total election and voter fraud to try to win. These are all the reasons the Dems are panicked and afraid of prosecution and jail for their crimes, sedition and even treason if Trump wins again.

The Fed continues to signal a huge warning sign the economy is in trouble. It has taken over the repo market, which gives short term funding for banks. Tens of billions of dollars are being injected into the global financial system on a nightly basis. If the Fed stops this, does the system implode?

Financial expert Martin Armstrong is the guest for the Early Sunday Release. Is what the Fed doing in the repo market a financial warning sign? Armstrong says a resounding “YES” and will explain why in detail.