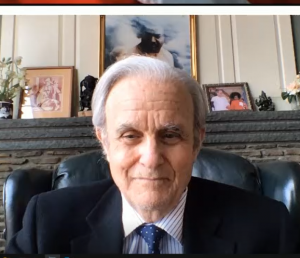 Legendary gold and market expert Jim Sinclair says the virus that originated in China may have, oddly enough, done some good. Sinclair explains, “The effect of the coronavirus was literally to shut down business globally, therefore, shut off the demand for loans, which also shut off demand for short term money. So, what the public has not seen, is not considering and does not understand is we were stepping into the door of a major financial crisis magnitudes larger than what happened in 2008 and 2009. It’s a horrible thing that this virus occurred, but if it had not occurred, we would have been in a crisis much more serious than 2008 and 2009. . . . It was blowing sky high . . . . Shutting down demand is all we could do. It stopped the explosion of interest rates.”

Where do we go from here? Sinclair says, “We are going to make a recovery. It’s not going to be a ‘V’ by any means. The stock market could be a ‘V’ because the stock market has very little to do with reality. . . . As far as business is concerned, very serious damage has been done to the infrastructure to the business equation. Many employers are gone. Many corporations have significant readjustments to be able to build up again. The supply lines and logistics, where did everything come from? China. . . . This is a major worldwide adjustment, both economically and politically. . . . We had everything made in the cheapest place possible. . . . This is not a passing phenomenon. . . . The only thing that has been steady is gold. . . . The change that this brings about is a reconstruction of the basic business foundations. It’s a start over, it’s not just a slowdown. How many restaurants make money on 50% of the clients? You can’t. How many automobiles have built up on the lots? Enormous amounts. How many clothing stores shut down full of winter clothes and can’t make the shift to summer wear? You can go down the entire line. So, this recovery will be more like an ‘L’. We’ve come straight down, and we are going to go sideways now. . . . Many businesses are not going to open up again. . . .The idea of the coming inflation as a result of this is simple. Everything that you need will go up in price. Everything you don’t need is not going to hold value. You are better off with a freezer full of fine cuts of beef than you are with a brand new Tesla. The beef will go up in price, the Tesla will go down.”

On gold, Sinclair says the ultimate price is an easy-to-calculate math problem. How much gold does America have compared to how much debt it has? So, how high could gold ultimately go? Sinclair says, “It’s simple math. You take the amount of gold the U.S. says it has, and then you take the debt it has, and what price would you need for the debt to balance to zero? The price on the low end is $50,000 per ounce. The true price is $87,500 per ounce.”

Sinclair thinks the recovery will take a decade or longer, and Sinclair says, “It will be just like the period between 1929 up to WWII (1941).”

Sinclair did call back in and said his power was knocked out for a short while. He also added, “I will give the re-election of President Trump a 50/50 chance. Trump knows what he has to do, and that is bring the economy back. If he does that, Trumps re-election will be a slam dunk. If Trump is not re-elected, the game board breaks.”

If you want to know about Sinclair’s company that he talked about and news that gold is finally being brought up out of the ground, go to TanGoldCorp.com.