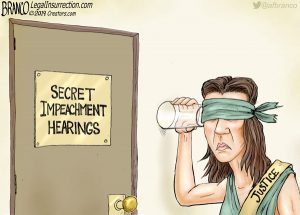 Both Democrats and Republicans are united against troop withdrawal that President Trump ordered in Syria. A meeting in the White House had Speaker Pelosi making claims of President Trump having a meltdown over the pushback he’s getting on Syria. Pelosi stormed out of the meeting, and President Trump describes Pelosi as “needs help fast.” Trump did get a ceasefire from Turkey so Kurds in Syria could retreat.

The mainstream media (MSM) is relentless in propaganda against President Trump. The MSM lies by omission of facts and outright lies in its quest of helping the Deep State and Democrats try to remove Trump from office. This week, the biased propaganda was caught on camera at CNN by Project Veritas with example after example of biased propaganda at the news outlet that once called itself “The most trusted name in news.”

The USDA is saying that there will be higher prices and lower yields for corn and soybeans this year. It has been indicating that the yields will not be that much lower, but other sources say the crop yields will decline by around 30% . Right now is harvest season, and nobody will know the outcome until the last cob is in the hopper. Lower yields will equal higher food prices.

Join Greg Hunter as he talks about the top stories in the Weekly News Wrap-Up.

(To Donate to USAWatchdog.com Click Here)  (Up-Date:  After 10’s of thousands of views with little or no monetization YouTube decided everything is OK and has given me some advertising $’s.  Just one of the many ways YouTube punishes USAW.  Thank you for your donations.)

Former CIA Officer and whistleblower Kevin Shipp will be the guest for the Early Sunday Release. He will talk about the political warfare going on in Washington, D.C.