Home
»
Political Analysis
»
The Elephant in the Room 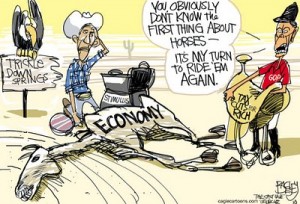 There has been a flurry of proposals this week on how to get the economy growing again.  The President has been giving speeches across the country offering up plans for more infrastructure spending, business tax cuts and credits.  The Republican plan includes keeping all the Bush tax cuts in place and rolling back spending to 2008 levels.  Basically, the Democrats want more stimulus spending and some tax cuts, and the Republicans want more tax cuts and some spending reduction.

I do not hold out much hope for either plan to lift the deeply troubled economy.  The reason?  We are dancing around the problem child—the banks. (The  financial reform bill passed in July did absolutely nothing to fix the banks or the economy.)  On the bottom of the spectrum, about 120 banks have failed  so far this year.  Underwater commercial and residential real estate loans are swamping the banks.  The trend here is for more failures than last year.  Last week, economist Nouriel Roubini of Roubini Global Economics said more than half of the 829 U.S. banks on the FDIC’s “Problem List” are likely to fail.  (Click here for more on this story.)

In July, I wrote about the cash problems the FDIC will face next year in a post called “Banking Disaster Largely Ignored By Mainstream Media.”At the current bank failure rate, the FDIC will surely be out of cash and relying on a Treasury credit line well before this time next year.  FDIC Chairman Sheila Bair appeared on CNBC with Larry Kudlow this week.  Did he ask her about the extreme stress with the banking system because of the surge in failures?  Not a chance.  The mainstream media continues to ignore this gigantic problem.

On the top end of the spectrum, there are the “Too Big to Fail” banks.  Under Congressional pressure last year, the Financial Accounting  Standards Board (FASB) changed the accounting rules for toxic assets such as mortgage backed securities.  According to a Bloomberg report, “Changes to fair-value, or mark-to-market accounting, approved by FASB today allow companies to use “significant” judgment in gauging prices of some investments on their books, including mortgage-backed securities. Analysts say the measure may reduce banks’ write-downs and boost net income.”  (Click here for the complete Bloomberg story.) To simply make up a value on questionable assets is nothing more than government sanctioned accounting fraud.  To abandon a major principle of accounting is a financial abomination!  Up until this rule change securities were valued in what is called “Mark-to-Market.”  It simply means valuing a security at what you can get for it today.  Also, a sharp reader of the site, ( Harold Goodman) points out this new change does not simply apply to securities but also real estate.  Harold wrote me and said the new FASB rule, “. . . applies not just to toxic derivatives on the balance sheets of the banks, but to the more than 1 million foreclosed properties banks are sitting on which have not been listed for sale.”

Renowned precious metals expert Jim Sinclair of JSMineset.com has written a new book called “A Pocketbook of Gold.” Sinclair cites what he calls a “Mark-to-Myth” accounting scheme, allowed by FASB, as a major reason to own gold.    Remember, until last year, securities used to be valued as “Mark-to-Market,”  (or its current value.)  Sinclair wrote, “Of course, if these toxic assets, for which there is little or no market, were ever properly taken onto the banks books, it would sink them completely. . . . The FASB changes are quite simply, a (now) legal way to lie about the financial health, and more specifically about the worthlessness of trillions of dollars of toxic assets on the Banks books.  ‘Mark-to-Market’ has become ‘Mark-to-Myth.’  In truth, the situation is dire, and banks and lawmakers are trying to push back the day of reckoning. . .”

The dramatically impaired U.S. banking system is the reason why the economy is not getting better.  According to financial writer Jim Willie, who holds a PhD in Statistics, there is only one solution to break the grip of this financial crisis.  Last week, Mr. Willie wrote, “The secret to a legitimate solution is easy. The big banks must write down their credit portfolios, and accept deep losses. If that results in liquidation, so be it!! Accounting fraud is not a substitute for restructure. Nor is dispatching badly impaired assets to the USFed, whose by all accounts is a Bad Bank Repository.” (Click here for the complete story by Willie.)

The economy cannot truly be fixed with tax breaks, stimulus, more debt or small spending cuts.  We have a deep financial insolvency dilemma.  A real recovery will only be achieved by honest reporting by the mainstream media, and honest accounting by the banks.  If we don’t demand this, then we will continue to dance around “The Elephant in the Room.”