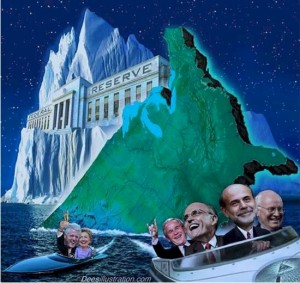 In the wake of the financial meltdown of 2008, the Federal Reserve announced it would buy mortgage-backed securities, or MBS.  The January announcement by the Fed said it would buy MBS from failed mortgage giants Fannie Mae and Freddie Mac in the amount of $1.25 trillion.  At the time, the Fed said in a press release, “The goal of the program was to provide support to mortgage and housing markets and to foster improved conditions in financial markets more generally.”  (Click here for the full Fed statement.) It did provide “support” to the mortgage market, but did it also buy fraud and cover the banks that sold it?  The evidence shows, at the very least, it bought massive amounts of fraud.

We now know the Fed definitely bought valueless MBS because it has joined other ripped-off investors to demand Bank of America buy back billions in sour home debt.  A Bloomberg story from just last week, featuring Philadelphia Fed President Charles Plosser,  reports, “The New York Fed, which acquired mortgage debt in the 2008 rescues of Bear Stearns Cos. and American International Group Inc., has joined a bondholder group that aims to force Bank of America Corp.to buy back some bad home loans packaged into $47 billion of securities.  On the one hand, the Fed has “a duty to the taxpayer to try to collect on behalf of the taxpayer on these mortgages,” Plosser said today at an event in Philadelphia.”

Mr. Plosser lamented the “difficult spot” the central bank is in because it is both bank regulator and plaintiff.  He said, “Should we be in the business of suing the financial institutions that we are in fact responsible for supervising?” (Click here to read the complete Bloomberg story.) To that question, I ask shouldn’t the Fed have done a much better job of supervising the big banks in the first place?  The whole financial and mortgage crisis from sour securities to foreclosure fraud is in the process of blowing sky high.  The entire mess is clearly the biggest financial fraud in history!  It looks to me like the regulators were just supervising their pay checks being deposited into the bank.

And remember, the $1.25 trillion of mortgage-backed securities the Fed bought from Fannie and Freddie?  How much of that is fraud?  William Black, the outspoken Professor of Economics from the University of Missouri KC, says all the big banks were committing “major frauds”in the mortgage-backed security market.  Black says, at Citicorp, for example, “. . . 80% of the mortgage loans it sold to Fannie and Freddie were sold under false representations and warranties.” (Click here for the complete Black interview.) Black claims the frauds increased at some banks, and it is sill going on today!   (I admit I used this same video in a recent post.  I use it again, because it is the single most important and damning indictment of the big banks out there.  Professor Black defines the size of the entire fraudulent mortgage mess.)

If he’s right, and I think he is, that means the Fed just spent the last 20 months (the  program ended in August 2010) buying a trillion dollars in mortgage fraud!  That is a staggering amount even for the most powerful central bank in the world.   Could the Federal Reserve have bought that amount of fraudulent MBS and not have known it?  Could the Fed have been buying that amount of rotten worthless debt to cover the banksters in the syndicate?  Who knows if we will ever find that out because the Federal Reserve cannot be independently audited. And who knows what else it bought in sour debt to bail out their banking syndicate buddies because the Federal Reserve cannot be independently audited! It has never been audited in its 97 year history.  I know one thing, if the Fed is going to keep its banking cartel alive, it is going to be forced to print massive amounts of money out of thin air to buy a heck of a lot more fraudulent mortgage-backed securities.  That’s what worries and scares me the most.